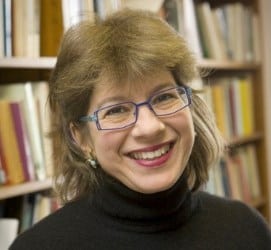 Heschel, a trustee since 2013, was honored with Trinity’s 175th Anniversary Award in 1999 and the Alumni Medal for Excellence in 2003. She received an honorary doctor of divinity degree from the College in 2010. She is a member of the Academic Affairs Subcommittee and Student Life Subcommittee.

Heschel and her husband, James Louis Aronson, have two children and reside in Newton, Massachusetts.