“In fact, if I went back to college today, I think I would probably major in comparative religion because that’s how integrated it is in everything that we are working on and deciding and thinking about in life today.”
– Secretary of State John Kerry, August 7, 2013

The study of religion is as much a process of transformation as an education. As a student of religion at Trinity, you learn to develop and exercise a respectful and open attitude toward a variety of beliefs and practices among the peoples of the world. You are challenged to learn critical thinking in order to separate the “wheat from the chaff,” the substance from the superficial, not only in the discipline itself, but in all of life’s endeavors. You study many religious persuasions, Tibetan Buddhists, Swiss Calvinists, French Catholics, Irani Muslims, while maintaining an enlightened balance between understanding and acceptance.

Religion as a major engages you in studies of history, literature, philosophy, science, and economics. It teaches you how to think clearly and analytically. It demands that you learn to articulate your thoughts both orally and in writing. It has its pragmatic side, offering a framework in which to examine moral values in different societies and the ways in which these societies resolve their moral conflicts. Religion offers the student a broader tablet, a chance to develop powers of perception more profoundly than in narrowly defined disciplines.

The study of religion at Trinity is distinguished by the diversity that is the mark of the liberal arts education. There is no limitation on the specific religious traditions or disciplines you may explore. Student – faculty interaction is both close and productive, offering working relationships that enrich and inspire. The diversity of the faculty members and their individual academic specialties reflect the diversity of this venerable, distinguished college and its enduring commitment to the liberal arts. Trinity College offers an intellectual environment in which you are encouraged to explore, to test yourself, and to challenge the spiritual and pragmatic implications of religion in the context of the emerging world order, an environment in which the subject matter comes alive. 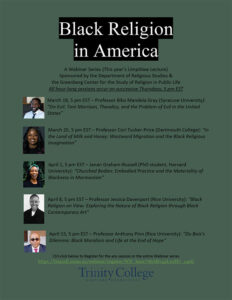 In the spring 2021 semester, the Department of Religious Studies and the Greenberg Center for the Study of Religion in Public Life hosted Black Religion in America: A Webinar Series
(This 2021 Limpitlaw Lecture)