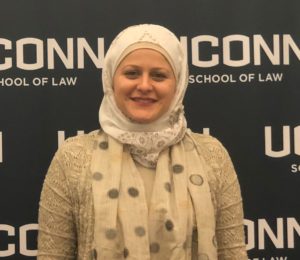 Maryam Bitar was born and raised in Damascus, Syria. After coming to the U.S. she earned her B.A. in international studies at Trinity College in 2016. During her time as an undergraduate, Ms. Bitar served as vice president of the Muslim Student Association. Ms. Bitar holds a Juris Doctorate from the University of Connecticut School of Law and is currently pursuing her L.L.M. In Human Rights and Social Justice. At UConn Law, she served as President of the Muslim Law Students’ Association.

Ms. Bitar is dedicated to interfaith dialogue, outreach, and understanding. She spends most of her time in Connecticut advocating religious freedom, tolerance, and social justice. In the summer of 2018, she worked as a legal intern at the Religious Freedom Institute in Washington, D.C. Ms. Bitar has also attended numerous seminars for religious freedom including interfaith seminars at Princeton University, Baylor Law School, BYU, and more. She has been featured as a speaker in series of panels called Honest Conversations with your Muslim Neighbor, organized by the Muslim Coalition of Connecticut.

Students can reach out to Ms. Bitar for ideas, spiritual questions, concerns, and to ask for any additional resources they may need. Her role as program coordinator for Muslim life is to advocate for the needs of Muslim students on campus. Jointly with MSA, Ms. Bitar coordinates weekly Jumu’ah (Friday prayer service), weekly halaqa (spiritual/educational gathering), outreach events, Mosque visits, and participation in collaborative events with other student organizations.