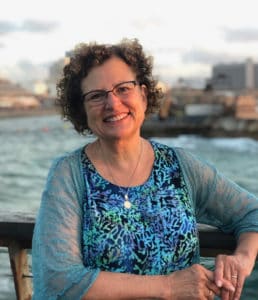 Lisa Pleskow Kassow lived in Jerusalem, Israel from 1978-1990, where she was a photojournalist. In 1990, Lisa won the annual Simon Rockower Award for Excellence in Jewish Journalism (Photography) for her coverage of the mass Russian Jewish immigration to Israel.

Before becoming Trinity’s full-time Hillel director in 2001, Lisa worked at the Greater Hartford Jewish Community Center (now the Mandell JCC) in West Hartford, CT. During her tenure at the JCC, Lisa directed adult education and later assumed the post of director of arts, culture, and education. Lisa Kassow is the founder and former director of the Hartford Jewish Film Festival, a program that Trinity co- sponsored for many years.

Lisa holds an MA in Jewish Education from Hebrew Union College-Institute of Religion, and a BFA in art from Carnegie-Mellon University. She completed the iCenter Masters Concentration in Israel Education (iFellows) in 2016. Lisa was the recipient of an Exemplar of Excellence Award from Hillel International in 2017 and the 2008 Jewish Vision Award of the Charter Oak Cultural Center in recognition of her involvement and work in the Greater Hartford Jewish community. E-mail: lisa.kassow@trincoll.edu 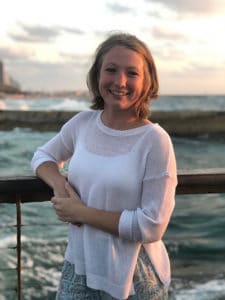 Leah Rose Staffin, a community builder and Jewish educator, hails from Teaneck, New Jersey. She graduated from Brandeis University, where she created her interdisciplinary major, Social Justice Studies. After college, Leah served as an Education Justice Fellow at Repair the World: Philadelphia, organizing volunteer opportunities and leading educational empowerment programs for local teens and adults. After her service with Repair, Leah worked as the Director of Youth Engagement at Temple Shir Tikva in Wayland, MA. Most recently, Leah completed her term as a Springboard Ezra Jewish Education Fellow and Program and Engagement Associate at Hillel at Washington University in St. Louis. At WashU Hillel, Leah advised student leaders and organizations, taught classes, managed social media accounts, and hosted social and religious events. She is very excited about her new role as Assistant Director at Trinity Hillel, a vibrant Jewish organization that shares both Trinity’s and her values of exploration, inclusiveness, and empowerment. Leah looks forward to working collaboratively with Trinity students, faculty, staff and members of the Greater Hartford community.