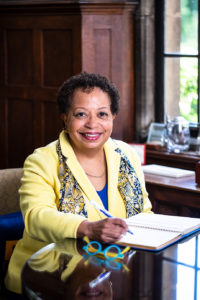 Joanne Berger-Sweeney, an accomplished neuroscientist and experienced leader in higher education, was inaugurated as the 22nd president of Trinity College on October 26, 2014.

The first African American and the first woman to serve as president of the college since it was founded in 1823, Berger-Sweeney is a champion of a liberal arts education, improving campus equity and diversity, fostering community and global engagement, caring for the school’s proud alumni, and preparing students to lead bold and transformative lives.

In 2017, Berger-Sweeney announced the completion of Trinity’s ambitious strategic plan, Summit, created through an inclusive, multiyear planning process as the college prepares to celebrate its bicentennial in 2023. A cornerstone of the strategic plan is attracting and enrolling strong students and meeting those students with outstanding experiences. Berger-Sweeney has overseen several student-centered initiatives, including the creation of the Bantam Network mentoring program for first-year students and the Career and Life Design Center, and the introduction of Trinity Plus, an innovative liberal arts curriculum for the 21st century. She has strengthened the college’s relationship with the dynamic capital city that is its home by expanding Trinity’s campus footprint into downtown Hartford, establishing an innovation center and the Liberal Arts Action Lab, part of the Center for Hartford Engagement and Research, and launching an exclusive liberal arts partnership with the global technology firm Infosys.

In addition to approving the college’s first sustainability coordinator, Berger-Sweeney has led the oversight of construction, renovation, and infrastructure improvements, including new athletic fields and the creation of the Crescent Center for Arts and Neuroscience and the Gruss Music Center.

Under Berger-Sweeney’s leadership, the college has increased by 50 percent financial aid for undergraduate students, enriching the socioeconomic, racial, and international diversity of the student body. Student retention rates (91 percent) have increased, as have postgraduation career outcome success rates, with 97 percent of the Class of 2021 employed, in graduate school, or engaged in full-time military or public service within six months of graduating. Since implementing a Special Opportunity Hiring initiative and staff hiring initiative, the college has increased substantially the number of tenure-track faculty and staff of color.

Since Berger-Sweeney’s arrival, Trinity has seen notable markers of financial success, including a string of balanced operating budgets, an endowment that has nearly doubled, and the launch of the largest fundraising campaign in the college’s history, now more than halfway to its ambitious $500M goal.

Berger-Sweeney has served on many boards in the Hartford region and beyond, including Hartford HealthCare, where she chairs the Governance Committee; the Connecticut Conference of Independent Colleges, for which she is the past chair; and the Hartford Consortium for Higher Education; and she was appointed to the board of the Capital Region Development Authority by Governor Malloy. She also serves on the National Collegiate Athletic Association Division III Presidents Council and as a board member of Cold Spring Harbor Laboratory and the Luce Foundation, as well as a member of the Neuroscience Selection Advisory Board for the prestigious Gruber Prize.

Berger-Sweeney is the recipient of numerous awards. She has been honored with a Lifetime Mentoring Award from the Society for Neuroscience (2006) and a National Science Foundation Young Investigator Award. In 2022, she was honored by Tufts University for her legacy of transformational Black leadership and was the recipient of the Edward Bouchet Academic Leadership Award from the Institute for Cross-Cultural Awareness and Transformative Education. She is a fellow of the American Academy of Arts and Sciences, the American Association for the Advancement of Science, and the International Behavioral Neuroscience Society (IBNS).

Before coming to Trinity, Berger-Sweeney served as dean of the School of Arts and Sciences at Tufts University (2010–14), creating the vision and setting the strategic direction for the university’s largest school. She began her academic career as a member of the Wellesley College faculty, joining in 1991 as an assistant professor in the Department of Biological Sciences and rising through the ranks to become the Allene Lummis Russell Professor in Neuroscience. Her teaching and research career at Wellesley spanned 19 years, including serving as director of Wellesley’s Neuroscience Program and an associate dean.

Berger-Sweeney received an undergraduate degree in psychobiology from Wellesley College, an M.P.H. in environmental health sciences from the University of California, Berkeley, and a Ph.D. in neurotoxicology from the Johns Hopkins School of Public Health, where she did the proof of concept work on Razadyne, one of the most widely used Alzheimer’s drugs in the world. She completed postdoctoral training at the National Institute of Health (INSERM) in Paris, France. Berger-Sweeney has authored more than 60 scientific publications, holds several scientific patents, and has held grants from the National Institutes of Health, the National Science Foundation, and numerous private foundations.

Her husband, Urs V. Berger, Ph.D., is a retired neuroscientist and music archivist. They are the proud parents of two children and Minty, a yellow Labrador retriever.