Trinity College is among 19 colleges and universities in the country to be named a Top Producer for both the Fulbright U.S. Student and Fulbright U.S. Scholar programs for 2019-2020. 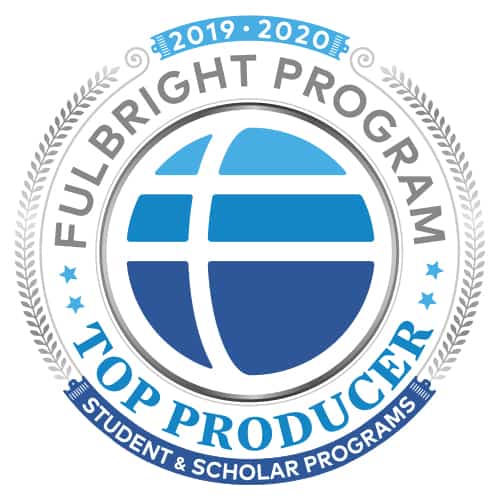 Each year, the U.S. Department of State’s Bureau of Educational and Cultural Affairs announces the top producing institutions for the Fulbright Program, the U.S. government’s flagship international educational exchange program. The Chronicle of Higher Education publishes the lists annually. Last year, Trinity was a Top Producer for the Fulbright U.S. Scholar Program and was tied for the highest number of awards to any baccalaureate institution in the nation. This is the fifth time since 2008 that Trinity has been named a Top Producer for the Fulbright U.S. Student Program.

Anne Lundberg, director of fellowships and adviser for the Fulbright U.S. Student Program at Trinity, said, “Fulbright has a reputation and a prestige that reflects well on the kind of teaching that we’re doing and the opportunities that Trinity students have. The faculty, staff, and administrators are very supportive and invested in helping students succeed.”

Two faculty members and four recent graduates from Trinity were selected for Fulbright awards for 2019-2020:

“Being named a Top Producer for both the Fulbright U.S. Scholar and the U.S. Student programs is a distinct honor,” said Interim Dean of the Faculty and Vice President for Academic Affairs Sonia Cardenas. “It’s also consistent with Trinity College’s mission of preparing bold, independent thinkers who lead transformative lives. To transform the world, one has to be immersed in it. Indeed, Trinity is a globally engaged community of students, faculty, and alumni. We are immensely proud of our Fulbright students and scholars—global ambassadors for the power of a liberal arts education.”

The Fulbright Program was created to increase mutual understanding between the people of the United States and the people of other countries. The primary source of funding for the Fulbright Program is an annual appropriation made by the U.S. Congress to the U.S. Department of State’s Bureau of Educational and Cultural Affairs. Over 2,200 U.S. students and over 900 U.S. college and university faculty and administrators are awarded Fulbright grants annually. In addition, some 4,000 Fulbright Foreign Students and Visiting Scholars come to the United States annually to study, lecture, conduct research, or teach their native language.

“We are delighted to see that the colleges and universities we are honoring as 2019-2020 Fulbright top producing institutions reflect the geographic and institutional diversity of higher education in the United States,” said Assistant Secretary of State for Educational and Cultural Affairs Marie Royce. “Fulbright alumni are leaders in business, government, and academia around the globe, advancing knowledge across communities, and improve lives around the world.”

Since its inception in 1946, the Fulbright Program has given more than 390,000 passionate and accomplished students, scholars, teachers, artists, and professionals of all backgrounds and fields the opportunity to study, teach and conduct research, exchange ideas, and contribute to finding solutions to important international problems. The global network of Fulbrighters fosters mutual understanding between the United States and partner nations, advances knowledge across communities, and improves lives around the globe.