Back to Office of Strategic Initiatives and Innovation

Bridging the Liberal Arts and the Future of Digital Technology

Trinity’s pathbreaking partnership with Infosys, announced in September 2018,  marks an unprecedented collaboration between a liberal arts college and a global tech giant.  It’s a national model for fostering new conversations between higher education and industry — and preparing today’s students for the future of work.

From the Liberal Arts to the Future of Work 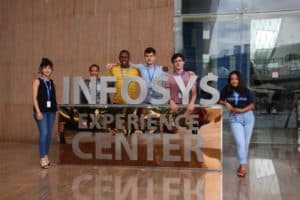 As one indicator of the value of a liberal arts degree, Trinity graduates are being hired by Infosys.  Several of our students are also working each summer in Bangalore as interns in InStep, ranked the top internship program in the world.  Learn more about Wendy Salto’s experience as a Trinity rising sophomore in India.

The liberal arts degree is alive and well -- and critically important to the future of tech.

Ravi Kumar, “The Liberal Arts Degree is Alive and Well—and Critically Important to the Future of Tech,” CNBC, August 27, 2019

“Graduates are told they can do anything with their Degrees. Is That Why They Feel Lost?” Chronicle of Higher Education, October 2, 2018

In the first year of a new partnership, Trinity College and global technology company Infosys are working together to leverage the liberal arts in creating the future of work.

Podcasts and Videos about the Trinity-Infosys Partnership

“What Infosys-Trinity Partnership Means for Liberal Arts and the Workforce,” May 14, 2019, WNPR

“What Infosys-Trinity Partnership Means for Liberal Arts and the Workforce,” May 14, 2019, WNPR

Trinity College engineering major Sandra Ofori ’23 is working remotely this summer as an intern with Scottish Rite for Children, a pediatric hospital in Dallas, Texas, under the direction of alumna Kirsten Tulchin-Francis, Ph.D. ’98.