WGRAC takes students on a number of educational trips and conferences every year, often in collaboration with other campus with other campus departments. With the Chapel we have attended the Truth & Reconciliation Workshop in Ferguson, MO; a Border Immersion Program in El Paso, TX; and, volunteered at Thistle Farms, Nashville, TN, an empowerment organization which serves women who have been victimized. With the Office of Multicultural Affairs we have attended National Women’s Studies Association Conferences in San Juan, PR; Milwaukee, Atlanta, and Cincinnati. Here are a couple of other excursions – closer to campus – that we’ve enjoyed:

Israel and the Palestinian Territories: Fresh Perspectives: A Geo-Political tour 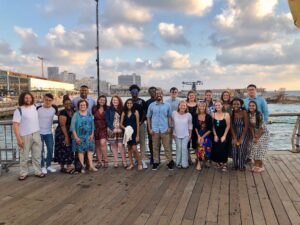 “A group of 17 Trinity College students participated in a 10-day multicultural experience last summer as they traveled through Israel and the Palestinian territories. The trip, titled “Fresh Perspectives,” ran from August 5 to 15, 2019, and was made possible by Trinity College Hillel with the support of a private foundation. Students explored the multi-ethnic, religious, and cultural diversity of the Old City of Jerusalem, developed an understanding of the geopolitical challenges on both the Gaza-Israel and Syria-Israel borders, and engaged with Israelis and Palestinians from Jewish, Christian, Druze, and Muslim communities.” Read more here!

In an excursion hosted by The Chapel and WGRAC, Trinity students traveled to Nashville, TN to visit Thistle Farms. Thistle Farms provides “housing, case management, healthcare, counseling, education, and employment for two years – free of charge. Our homes operate on a holistic model with no authority living in the house. Each one represents a community built on trust and love. Meaningful employment leading to financial freedom is instrumental in the healing journey. A sisterhood of like minded organizations that collaborate to provide housing, healing, and employment for women survivors across the country. The survivor-led network houses over 500 women in healing sanctuaries across the country.” Read more here!

Hosted by The Chapel and WGRAC, Trinity students traveled to El Paso, Texas. “Student activists from all over the Roaring Fork Valley are about to embark on a trip designed to broaden horizons and create awareness about the conditions in a location prevalent in today’s politics and society: the US-Mexico Border. The experiences in El Paso are mind-opening and sometimes emotionally intense.  Students will absorb a tremendous amount of information about the complexity of immigration. There are no simple answers, and students will begin to grasp that. It is by no means a comfortable trip.” Read more here!

Hosted by WGRAC and the Office of Multicultural Affairs, Trinity students have traveled to San Juan, PR, Atlanta, GA, and Berkeley, CA for the National Women’s Studies Association’s Annual Conference. “Established in 1977, the National Women’s Studies Association has as one of its primary objectives promoting and supporting the production and dissemination of knowledge about women and gender through teaching, learning, research and service in academic and other settings.” Read more here!

On a brisk Saturday in October we drove an hour or so into the beautiful countryside of CT to visit the Prudence Crandall Museum. After eating yummy pancakes and eggs at a diner/restaurant about a mile down the road, Yodalis, Channon, Rosalia, Niki, Beth, Andrew and Laura found the museum (yes, some of us had “directions issues” 🙂 ).

Who was Prudence Crandall? A little herstory:

Prudence Crandall (1803-1890) opened an academy on the Canterbury Green in 1832 to educate daughters of wealthy local families.  The school was extremely successful until the following fall when she admitted Sarah Harris, a 20 year old black woman. Sarah had hoped to become a teacher with the help of the education the academy could provide. Refelecting the attitudes of the times, Sarah’s admittance to the academy led parents to withdraw their daughters.

Miss Crandall made contacts throughout New England’s free black communities to attract young black women students. They came from as far away as Boston, New York City and Philadelphia. The state responded by passing the “Black Law” which made it illegal for Crandall to operate her school. Miss Crandall was arrested, spent a night in jail, and faced three court trials. The case was dismissed in July of 1834. Two months later a mob attacked the school, forcing Crandall to close. The courage shown by Miss Crandall, our state’s official heroine, features prominently in civil rights history. The “Black Law was repealed in 1838.

We learned an incredible amount, and had a fantastic time. If you’re intrested in coming along next fall, let us know! Laura.Lockwood@trioncoll.edu

On a beautiful April weekend, four of us set out for Seneca Falls, NY, the birthplace of the women’s rights movement in the United States. After a fun four hour ride, we found our hotel, ate some good food, then set out to discover the wonders of women’s history and our Founding Mothers. We visited the National Women’s Hall of Fame (see below),  the site of the 1848 Women’s Right’s Convention, the museum-like Visitor’s Center and Elizabeth Cady Stanton’s house. We did some great shopping for the Womens’ Center and friends and family, hung out at a cool coffee shop, and lazed by the river. As it was the end of the semester there was studying to do, and there was plenty of time in the van and the hotel to do that. Overall it was fun and relaxing, and very interesting – we learned so much and had a great time doing it!!

“What are we next to do?” asked Elizabeth Cady Stanton after the 1848 convention. The women of Seneca Falls had challenged America to social revolution with a list of demands that touched every aspect of life. Testing different approaches, the early women’s rights leaders came to view the ballot as the best way to change the system, but they did not limits their efforts to one issue. Fifty years after the convention, women could claim progress in property rights, employment and educational opportunities, divorce and child custody laws, and increased social freedoms. By the early 20th century, a coalition of suffragists, temperance groups, reform-minded politicians, and women’s social welfare organizations mustered a successful push for the vote. Although the ballot was never the primary agent of social reform, as many had hoped, the fight for suffrage expanded the women’s influence in the political arena. Again the question arose: What next? Immediately after 1920 many worked for reform through groups such as the League of Women Voters and national political parties. Some women asserted their rights on a personal level by attending college, taking jobs, adopting new clothing fashions, and practicing birth control. Then, as now, each woman sought her own definition of freedom.

In 1848, the Seneca County Courier warned that the convention’s resolutions were “of the kind called radical…Some will regard them with respect-others with disapprobation and contempt.” The story of the women’s movement is the story of ideas one controversial, now unremarkable.

We went to the Visitor Center where one can view an inspirational film and experience interactive exhibits. You can then proceed to the Wesleyan Chapel and imagine yourself a participant in the First Women’s Rights Convention. Then take a guided tour of the Elizabeth Cady Stanton House where she raised seven children and started a women’s rights movement. In nearby Waterloo, one can visit Hunt House where the Convention was planned.

At the National Women’s Hall of Fame, we learned about a multitude of women who contributed to America in the fields of science, education, and civil rights:

“To honor in perpetuity those women, citizens of the United States of America, whose contributions to the arts, athletics, business, education, government, the humanities, philanthropy and science, have been the greatest value for the development of their country.”