Back to International Studies

In the Spring of 2002, the International Studies Program welcomed the first McGill Fellow in International Studies to the campus. A generous gift from Patricia C. and Charles H. McGill III (class of ’63) enabled us to bring a fellow from around the planet to teach two courses, be in residence for a term and offer a public lecture. The fellows ranged from the award winning Indian journalist P. Sainath to the Iranian human-rights leader Nastaran Moosavi to the Cuban poet/artist Pedro Pérez Sarduy. They enriched our program, and inspired and challenged our students.

In 2008, we decided to rework the McGill Fellowship. No longer do we invite a distinguished fellow to spend a semester with us each year. Instead, we are able to have a McGill Visiting Assistant Professor of International Studies on campus for a year (to teach three courses and deliver a lecture) and in the next to invite a prominent public personality to deliver the Patricia C. and Charles H. McGill III ’63 Distinguished Lecture in International Studies at Trinity College.

Since then, thanks to the continued support of the McGill family, we have continued the tradition of alternating a Distinguished Lecturer with a Visiting Assistant Professor, expanding both curricular and extra-curricular opportunities for our students and enlivening discussions about issues of global importance across campus. As of 2019, the McGill Fellowship is for two years. 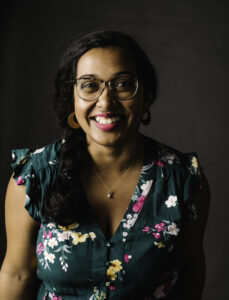 Natassja B. Gunasena is the 2020- 2022 Patricia C. and Charles H. Mcgill III Visiting Assistant Professor in International Studies. She holds a Ph.D in African and African Diaspora Studies from the University of Texas at Austin where her research focused on transnational Afro/Asian public cultures and diasporic formations of race, gender and sexuality. In her research and teaching, Dr. Gunasena emphasizes the urgency of transnational analytics for grasping how raced and gendered violence, as well as resistance to such violence, circulates through diasporic bodies and diasporic praxis. She is currently working on a monograph entitled “Cobra Women: Race, Sexuality and Afro/Asian Diasporic Formations” that explores linkages between visual cultures, race science, nation building, and racialized, performing female bodies in the late 1800s to the mid-to-late 1900s. As an instructor, she is passionate about encouraging students to think transnationally, comparatively and critically about discourses on race, gender, militarism and imperialism. At Trinity, she teaches “Global South,” “War and the Asian Diaspora” and “Queer South Asian Identities.”

Daniela F. Gomes da Silva is from São Paulo, Brazil and is a PhD in African and African Diaspora Studies.

Dr. Gomes has been using her work to connect people in the African Diaspora. The focus of her efforts is to build international bridges to fight against racism around the globe. She has developed several lectures and participated in conferences focusing on race relations in Brazil and other countries. As an educator, Dr. Gomes believes that good teaching involves helping students to discover their path, how they want to construct a classroom environment that allows them to pursue their future. She designs her classes by thinking about strategies that will contribute to students’ growth both personally and professionally. In addition, she values the concept of intersectionality and creates her classes under an interdisciplinary approach that welcomes students’ particularities.

2018: Emily Mitchell-Eaton (view the photo gallery)
Topic: “We are Here Because You Were There: The Imperial Migrations from the Marshall Islands to Arkansas”

2016: Anida Ali (view the photo gallery)
Topic: “Transcending the In Between: A lecture, performance and visual experience of hybridity, otherness and exiled bodies” (read a news article about the performance)

2002: Palagummi Sainath
Topic: “So Near to God, So Far From Heaven; Reporting Rural India”

2017: Santiago Gamboa (view the photo gallery)
Topic: ‘The art of narration and travel writing: a Latin American Writer in India’

2013: Sharif Abdel Koudous (view the photo gallery)
Topic: “Egypt: Is it a Revolution?”

2007: Pratyoush Onta
Topic: “Can NGOs generate knowledge? Reflections on the landscape of the knowledge enterprise”