Back to International Studies

To earn honors, INTS majors must complete a one-credit Honors Thesis. The thesis is an opportunity for students with a strong academic record in the major to work closely with an INTS faculty member and to pursue independent research beyond the level attained in the Senior Seminar. Students are encouraged to use their language skills, the courses they have taken toward the major, and their experiences abroad to shape their area of inquiry and to determine their methodology. Students pursuing the thesis option will ordinarily take the Senior Seminar in the fall of their senior year and the one-credit Honors Thesis in the spring, although preparation and research for the thesis should begin well ahead of time. Applications for the thesis are typically due to the Director in late October. 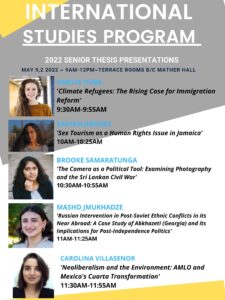 Amelia Huba “Climate Refugees: The Rising Case for Immigration Reform”
Sahian Jimenez “Sex Tourism as a Human Rights Issue in Jamaica”
Brooke Samaratunga “The Camera as a Political Tool: Examining Photography and the Sri Lankan Civil War”
Masho Jmukhadze “Russian Intervention in Post-Soviet Ethnic Conflicts in its Near Abroad: A Case Study of Abkhazeti (Georgia) and its Implications for Post-Independence Politics”
Carolina Villasenor “Neoliberalism and the Environment: AMLO and Mexico’s Cuarta Transformation”

Hamna Tariq “The Permanent Liminality of Pakistan’s Northern Areas: The Case of Gilgit Baltistan”
Kaytlin Ernske “The Dragon’s Neocolonial White Elephant: China’s Urban Infrastructure in Lusaka, Zambia”
Gillian Reinhard “Orientalist Opera: Western Perceptions of the Other in the Early 20th Century”
John Gillespie “Kick it Out & Keep it Out: Racism in the English Premier League since 2014”
Elisabed Gedevanishvili  “Embedded Plutocracy: A Spectacle of Reform in Post-Revolutionary Georgia”

Hannah Grosberg “Bodies and Borders: Navigating Colonial and Capitalist Desires in Trinidad and Tobago”
Nicola Kostic “’Go West and Also Go Global’: An Analysis of China’s Double Turn and Convergence at the Dawn of the 21st Century” 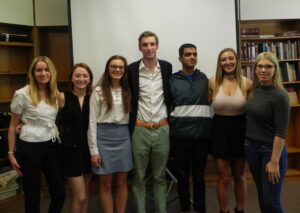 Warren von Weise “The Forgotten Assassinations: Dr. Malcolm H. Kerr & Ambassador Adolph Dubois”
Serena Seaman “The Politics of Hiking in Israel/Palestine: A Colonization Guide”
Francesca Oliveira “How to Prove the Existence of a Ghost”
Chris Filpo “Surviving in Urban Cities: Sociological Perspectives of Black and Latino Americans in the United States’ Era of Mass-Incarceration (1960s-present)”
Elizabeth Valenzuela “Challenging Dominance: The Case of Hindu Musicians, Women, and Youth in Trinidad”
Samantha Constantinou “A Comparative Approach on Latin American Immigration to the U.S., Past and Present: Mexico, Cuba, and Nicaragua”
Chinmay Rayarikar “Rwanda: Development Towards Authoritarianism”
Jamie Brandel “A Voice for the Voiceless: The UNPO and the Dalai Lama”
Alexa Anderson “From Liberation to Occupation: Orientalism Within the Context of the U.S. Occupation of Iraq” 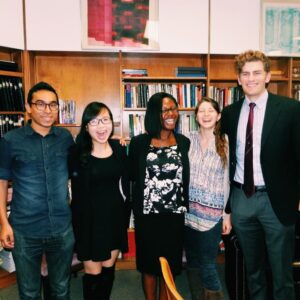 Lara Abiona “Of Maps, Margins, and Storylines: Sociologically Imagining Chimamanda Ngozi Adichie’s Americanah and The Thing Around Your Neck”
Ian Robinson “The Commodity City – Small Business and the State in Yiwu, China”
Schirin Schenkermayr “A Flower Between the Cracks: How Contemporary Theater Defies the Fragmentation of Palestine”
Ichi Ha “Shamanistic Traditions in Vietnam: Comparative Studies of Thai Shamanism and the Mother Goddess Practice”
Jake Villareal “Structural Failure: Identifying the Sites of Resistance in the Partnership Between Israel and Heidelberg Cement” 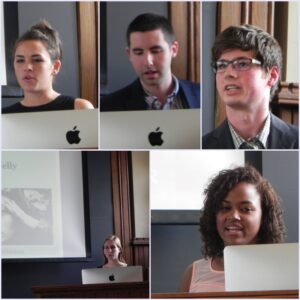 Alex Brown “Who to Call in Europe”
Alex Hermsen “Violence in Colombian and Cambodian Film: Truth, Past, and Memory”
Caroline Hayes “‘Out’ in the Open: The Price of Visibility in the Queen Boat Scandal”
Carolyn Kimmick “‘Prisoner of a Stunted Progress Model’: Ana Tijoux and her Critique of the ‘Chilean Miracle’”
Fayola Fraser “Jews and Arabs in Argentina: A Study of the Integration, Interactions, and Ethnic Identification of Argentina’s Migrant Groups”