Back to Department of Classical Studies

Minors—Four minors are housed in the Department of Classical Studies. 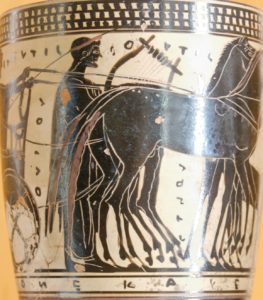 Ancient Greek
A sequence of six courses develops linguistic skills for reading literature in ancient Greek. In addition, the minor will include either a .5-credit Language Across the Curriculum unit or a .5-credit integrating paper, typically written in conjunction with the last course taken for the minor. No more than one transfer credit may be applied to the minor.

Latin
A sequence of six courses develops linguistic skills for reading literature in Latin. In addition, the minor will include either a .5-credit Language Across the Curriculum unit or a .5-credit integrating paper, typically written in conjunction with the last course taken for the minor. No more than one transfer credit may be applied to the minor.

Classical Antiquity
The purpose of the minor is to allow students to acquire a general knowledge of the achievements of ancient Greece and Rome, which traditionally have constituted, along with the Judeo-Christian tradition, the chief ingredients of Western civilization. Despite the advance of technology, shifts in educational and societal priorities, and an increasing awareness of other civilizations in the 20th century, Homer, Plato, Cicero, and Caesar remain lively figures, and the classical tradition still pervades our poetry and prose, our philosophy and law, our ideas of history, our conceptions of education, and our art and architecture. The student electing this minor will have the opportunity to become acquainted with the classical achievements in each of these areas and to shape that knowledge into an integrated view of antiquity. Students take six approved courses, then either take a short essay exam or submit an integrating paper.

“Mythology” means “the explanation of myths”—but what is a myth? Since antiquity, people have employed stories in order to explain their social group’s particular values, practices, and beliefs: in other words, their cultural identity. A myth is thus a key element of cultural discourse and fundamental to the larger group activity of world-building. This kind of story-telling produces an understanding of the world and the group’s place within it that is based not on the results of scientific inquiry, but on tradition: what has been handed down over time as constituting “us.” Even today, myth rivals scientific inquiry in offering a meaningful lens through which people understand their lived reality and interact with the world around them, whether or not this understanding of the world accords with facts or the worldviews of other groups. As a basis for forming opinions and taking action, myths have often proven to be more powerful than facts, a phenomenon that should command our urgent attention not just for understanding other times and societies, but for understanding our own, today. In this interdisciplinary minor, students will explore how various cultural traditions, around the world and throughout history, have employed myth.

Students take six courses to fulfill this minor. Out of the six courses, at least one must be CLCV 203, “Mythology,” or RELG 101, “Introduction to Religious Studies.” Students may apply both of these courses to the minor. Overall, the six courses must be inclusive of at least three different departments and programs. Departments and programs that typically offer courses suitable for this minor include American Studies, Anthropology, Art History, Classical Studies, English, Film Studies, History, Language & Culture Studies, Religious Studies, and Women, Gender & Sexuality. Students will consult with their minor coordinator to determine which specific courses are appropriate.