Maurice Wade has spent his career as a professor of philosophy and a contributing faculty member in the Public Policy and Law Program and the International Studies Program at Trinity College. His most recent project focusing on the work of Caribbean intellectual and activist Lloyd Algernon Best has woven together philosophy, economics, history, literature, and more into an ambitious interdisciplinary venture.

Wade shared some of his research during the annual Shirley G. Wassong Lecture on April 5, 2021. Presented virtually by the Trinity Institute for Interdisciplinary Studies, Wade’s lecture and research highlighted the power of an interdisciplinary, cross-genre exploration of big questions that transcend genre through collaborative, innovative study.

In 2013, at the invitation of Professor of History and International Studies Dario Euraque, Wade went to Trinity’s Trinidad campus. There, he visited the Lloyd Best Institute of the West Indies, and was introduced to Best’s copybooks—his unpublished personal notebooks. This initial introduction to Best’s writing began a years-long study of his thought. Wade delved into the Trinidad native’s writings, including his private journals and his published work. At the heart this exploration is a study of Best as a decolonial thinker and activist who contributed to an ongoing discourse about Caribbean identity.

Working on Best’s thought inspired Wade to initiate the Caribbean Anti-Colonial Thought Archive Project. This online project is intended to be a continuing effort to make available any and all forms of Caribbean anti-colonial thought to interested students and scholars and to provide opportunities for collaborative study between Trinity students and faculty interested in the Caribbean. Trinity’s Center for Caribbean Studies has established a fellowship that will support students who are interested in continuing the work of building this online archive.

“What the Caribbean is and what it should aspire to become, economically and otherwise, should be determined for itself on its own terms, even if this means pursuing policies and collective aspirations, economic and otherwise, that are quite different from those of the so-called First World,” Wade said during the Wassong Lecture. In his talk, Wade described the ways in which Best was critical of pedagogy that was highly dependent on a Eurocentric vision of what the Caribbean should aspire to become. Best rejected formulaic and dogmatic adherence to standards established by colonial powers from Western Europe, Wade said, and invited a new perspective rooted in the Caribbean as a particular “context of being and belonging,” and the vibrant cultural identity emanating from the region. 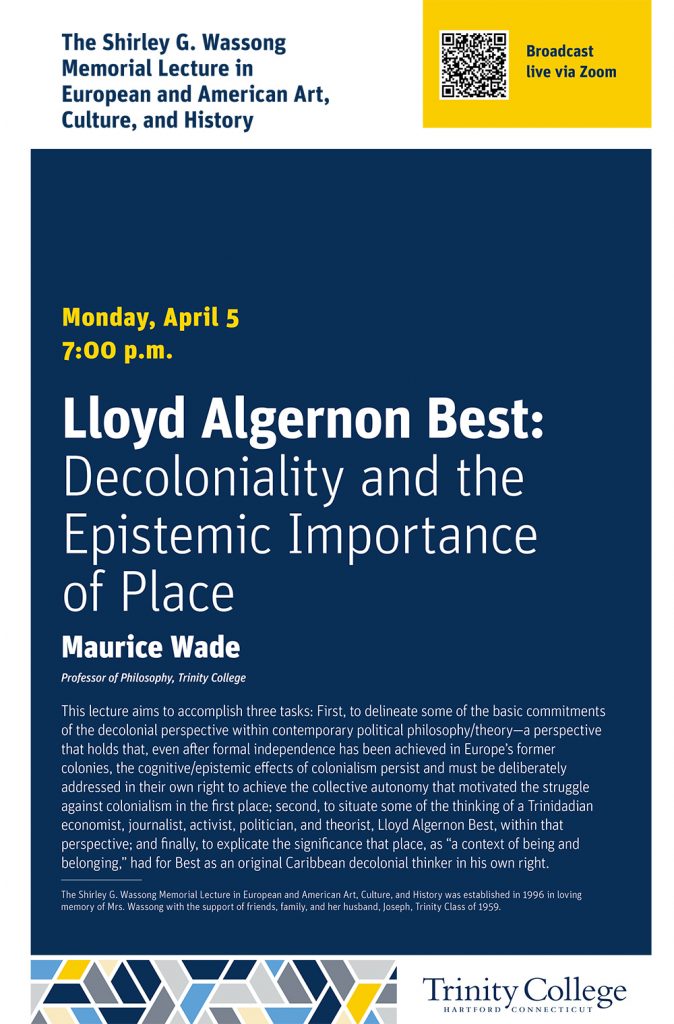 The Trinity community is uniquely positioned to receive this scholarship, with a rich Caribbean population in the surrounding city of Hartford, and an active Caribbean Studies program. Wade underscored that there is value in bringing Best’s ideas into the American discourse. He said, “There’s more to it than just history. It’s about breaking out of our intellectual straight jackets, and having honest intellectual engagement and understanding even ourselves through a decolonial lens.” Wade emphasized that integrating thinkers like Best into the conversation could enable a deeper connection with the community, and with the Caribbean itself. “Real inclusiveness requires understanding,” he said.

Wade’s lecture was made possible by the co-directors of the Trinity Institute for Interdisciplinary Studies and the Wassong family. The Shirley G. Wassong Memorial Lecture in European and American Art, Culture, and History was established in 1996 in loving memory of Mrs. Wassong with the support of friends, family, and her husband, Joseph Wassong ’59. Since 2010, the Trinity Institute for Interdisciplinary ​Studies has organized this annual lecture.

To watch a video of the lecture, click here.