A look back at 2017–18, including faculty, student, and staff highlights; the adoption of Summit, Trinity’s new strategic plan; and so much more.

See some of the work of our students, staff, and faculty that make us proud!

The Watkinson Library received a donated collection of comic books and graphic novels.

The creativity and intellectual capital are here; now we’re galvanizing the collaborative leadership to write an exciting new story for Hartford.

In September, the Crescent Center for Arts and Neuroscience opened in a brand-new building at the south end of campus.

Trinity has started an exchange program with Rikkyo University in Tokyo, with our first student studying there in spring 2017.

Welcoming the Class of 2022

Associate Professor of Theater and Dance Michael Preston took on the lead role for the 20th anniversary of Michael Wilson’s beloved production of A Christmas Carol—A Ghost Story of Christmas at Hartford Stage.

Summit: A Strategic Plan for the Future of Trinity College

After 18 months and with the help of the entire community (including 80 who served on various committees), Trinity College adopted a new strategic plan, Summit, setting us on a bold path toward our bicentennial and beyond.

In October, Trinity announced the appointment of Drew Galbraith as the college’s next director of athletics and chair of physical education.

The first-year seminar I have been teaching this fall is probably the most impressive, student for student, that I have taught in 15 years at Trinity. And when I talk with colleagues around campus, I hear the same story over and over—that their first-years and sophomores are intellectually engaged, creative, open-minded, motivated, and respectful of their peers in numbers that those colleagues haven’t seen in years, if ever. Trinity feels like a place where the campus culture is transforming itself quickly, and in exciting ways... .

The Bantams’ win over Wesleyan capped the football team's season at 8–1 and clinched a second consecutive NESCAC title.

The campus engaged in a yearlong programming initiative that sought to define higher education’s role in promoting a just society.

At a recent forum on "Bridging Divides," the two of us participated in a campus conversation about the essential value of unfettered inquiry and debate as the heart of a liberal arts education... . It exemplified the kind of open and free-flowing community discussion that can enable colleges and universities to find ways to come together to develop core principles governing free expression before a crisis ever envelops a campus.

Marcus Garvey Popular Theater Project comes from the Caribbean to Hartford—home to one of the largest West Indian and Caribbean populations in the United States.

John Rose retires after 40 years of Chapel music and memories.

Trinity is a key partner in the Hartford/East Hartford Innovation Places Planning Team that has been selected to receive a share of $30 million in state funding to spark economic development and investment in innovation.

The longtime academic and mentoring program serving children in the Hartford area celebrates 20 years on campus.

In the aftermath of Hurricane Maria, the Trinity community lends its support to scholars, students, and citizens from Puerto Rico.

Highlights of J-Term included a new "Designing Your Life" course and study away in Bénin and Paris.

Trinity welcomed its first cohort of students in the new “January Start” program, beginning with an intensive two-week personalized orientation to the college and to Hartford.

Deborah Buck ’78 brought to the Widener Gallery an exhibition of works on paper that combine Japanese sumi ink with densely layered compositions of acrylic, pastel, and chalk—work described by art critic Gregory Volk as “protean paintings that seem like eccentric, ever-metamorphosing mini-worlds or vibrant environments.”

The initiative with the nonprofit, nonpartisan think tank will be called CT21@Trinity and housed within Trinity’s master’s program in public policy.

Kassow was honored as an “exemplar of excellence,” an award that coincided with the 70th anniversary of Hillel at Trinity. 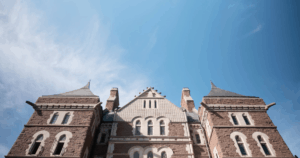 A comprehensive evaluation that began with a campus visit in March 2017 culminated in a decision by the Commission on Institutions of Higher Education that Trinity be continued in acceditation.

In preparation for the visit of the Evaluation Team, members of the Trinity community conducted a two-year process of self-study that culminated in a final report​. You may view the Evaluation Team’s report and Trinity’s response​.

Trinity’s next comprehensive evaluation is scheduled for the spring of 2027.

I think that the current leadership at Trinity seems very committed to building a stronger partnership between the college and the city, and we look forward to continuing to work with President Berger-Sweeney to accomplish that.

Williamson, associate professor of political science and public policy and law, is a co-investigator on the AmeRicans’ Conceptions of Health Equity Study (ARCHES), which was awarded a $699,960 grant from the Robert Wood Johnson Foundation.

Anthropology Professor James A. Trostle is a co-principal investigator on a research study that recently received a four-year grant award of $2,666,768 from the National Institutes of Health (NIH). The grant supports research examining the development and spread of two infectious diseases—Zika and dengue, both transmitted by the same mosquito species.

The associate research professor is investigating the embryonic development of Tribolium, better known as the flour beetle.

Make your shoulders strong—I guarantee you’re going to pave the way for somebody else to stand on them.

The 25th annual International Fire Fighting Home Robot Competition brought to Trinity 70 teams from seven countries, all in the name of advancing robotics as an educational tool.

Trinity's 13th International Hip-Hop Festival was a three-day celebration of the power of hip-hop as an educational tool and source of cultural identity for artists, educators, scholars, and organizers from around the world.

Samba Fest, in its 12th year, was a three-day event in April that welcomed people from near and far to enjoy Brazilian music, food, culture, and activities.

In 2018, Trinity had one of its most successful Giving Days ever, raising more than $2.3 million from 2,290 donors and unlocking the Chair’s Circle Challenge that contributed an additional $500,000 to the college. 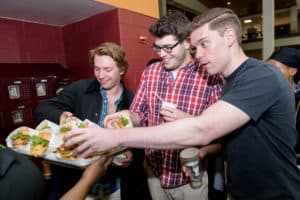 In conjunction with Giving Day, the Board of  Trustees, including Shake Shack founder Danny Meyer ’80, P’20, hosted a senior send-off party at the Koeppel Community Sports Center, complete with Shack fare, ice skating, music, and games.

The Data Collaborative will move into space at 10 Constitution Plaza and team up with the Liberal Arts Action Lab to build a data ecosystem to benefit the Hartford region.

The incoming class sets new highs for academic strength and diversity of all kinds, including the largest international contingent in the college's history.

Announcing the appointment in June, President Berger-Sweeney said Davis impressed with her breadth of experience, including extensive research, publication, and teaching, as well as her work directing training around diversity and inclusion.

In June, the college celebrated the dedicated service of retiring faculty and staff, as well as those who've been at Trinity for 25 years or more.

Remember that wherever you go from here, Trinity will always be here for you; it will be your home. 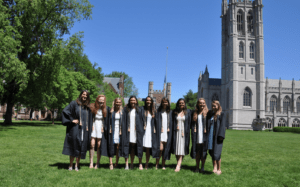 A special ceremony was held on May 21 for the nine graduating members of the Trinity women’s lacrosse team who missed Commencement while playing in the NCAA Division III tournament. The team made it as far as the national quarterfinals before falling to Salisbury University. It was the seventh consecutive year the team had made it to the Elite Eight.

More than 1,000 alumni and family members returned to campus to celebrate Reunion in June.

During Reunion Weekend, alumni enjoyed more than 80 events and activities, including Friday night’s traditional New England-style clambake, campus tours, story time with the Bantam, tours of the Trinity Chapel and carillon, and an alumni football challenge on the newly renovated Jessee/Miller Field, and more.

More than 300 alumni and friends gathered on the Main Quad for the Parade of Classes that led into Convocation, where several alumni were honored with prizes and where former University of Hartford president Walter Harrison ’68 received an honorary doctor of humane letters degree.

See a collection of Reunion photos.