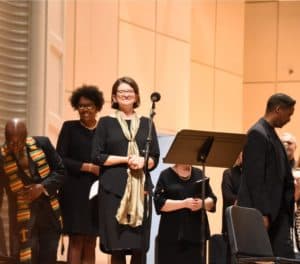 Ellen Dickinson is the college’s official carillonneur. The 49-bell Plumb Memorial Carillon, housed in the Trinity College Chapel tower, is one of the finest in the country. Ellen discovered the carillon at Yale University, where she received a bachelor’s in music and a master’s in music from the Yale School of Music and Institute of Sacred Music.

Ellen has performed carillon concerts throughout the United States, Canada, and Europe. In addition to her role as Trinity’s Carillonneur, she also serves as Yale University’s carillon consultant and adviser, and is director of music at Norfield Congregational Church in Weston, Connecticut. In 2006, Dickinson co-founded the Jubilate Ringers, a community hand bell ensemble.

It would be difficult to find a member of the Trinity College community who has never heard the bells of the historic Trinity Chapel. Ellen Dickinson—musician, composer, and college carillonneur at Trinity—is the woman behind that music and has served the college for a decade.