Trinity College continued its celebration of the 50th anniversary of Title IX by welcoming Big East Commissioner Val Ackerman to campus on December 1. Title IX is a federal civil rights law that prohibits discrimination on the basis of sex in any type of federally-funded education program or activity, including athletics.

Ackerman spoke to student-athletes about how Title IX shaped her own experiences as a collegiate athlete at the University of Virginia, as former president of the WNBA and USA Basketball, and in the transition to her current role as commissioner of the Big East Conference.

Before the enactment of this federal civil rights law, Ackerman recalled that there were few opportunities for women and girls in the sports community. Her memories echoed those of Trinity College President Joanne Berger-Sweeney, who spoke in her opening remarks about the limited chances to be involved in sports as a young woman.

“Title IX is an important law because it has been transformational on our society and it did open so many doors for girls and women in sports,” Ackerman noted. “It, in many ways, also helped men’s sports grow in this country because of the emphasis that was put on athletics in high schools and colleges.”

Ackerman said that the intent of this legislation—passed on June 23, 1972, as she was coming out of the seventh grade—was lost on her as a 13-year-old at the time, but that didn’t stop it from altering the trajectory of her life. She was a three-sport athlete in high school while growing up in central New Jersey, playing field hockey in the fall, basketball in the winter, and running outdoor track in the spring. Thanks in part to Title IX, Ackerman’s education was enabled by the law, as she was afforded the opportunity to play women’s basketball in college at the University of Virginia, where the program was still in its infancy.

Ackerman’s basketball career as a Cavalier had an unorthodox start without the recruitment process of female athletes at the high school level at the time. She laughed when remembering how her mother brought “a scrapbook with clippings from the Trenton Times of games [she] played in high school” to college visits as a form of “reverse recruiting” before her acceptance at Virginia in 1977. Today Virginia houses 13 women’s varsity sports, while Trinity boasts 15.

After graduation, Ackerman played professional basketball in France for a year before earning a law degree from UCLA in 1985. Ackerman started her legal career as a corporate and banking associate at the New York law firm of Simpson Thacher & Bartlett and joined the National Basketball Association as a staff attorney in 1988 and handled NBA matters including the first Dream Team. She was an executive at the NBA for eight years, serving as special assistant to NBA Commissioner David Stern and director (and later) vice president of business affairs before being named the WNBA’s first president in 1996. She guided the league to a much-heralded launch in 1997 and headed its day-to-day operations for its first eight seasons. The league celebrated its 25th season in 2021.

“It was something I worked on, helped the league get off the ground, then eventually it was the league I was asked to run [as the first president] by my bosses at the NBA,” Ackerman said. “It was really exciting to be a part of the launching of a new league, and I think we were kind of ahead of our time in some ways regarding the themes we were pushing about women and empowerment.”

During the talk in Mather Hall’s Washington Room, Trinity volleyball team member Grace Sullivan ’25 asked how Ackerman approached meetings or situations when she was the only woman in the room. Ackerman alluded to times from her early career—and even in her current role—that she finds herself in those moments, and she understands how daunting it can seem, but said that one must put those stressors out of mind and focus on the task at hand.

“I have found that in those settings you have to be confident, to be relaxed and friendly, and competent all at once,” Ackerman said. “If you can do all those things, then you will achieve some level of effectiveness and hope people will respect you and accept you for who you are, regardless of gender.” 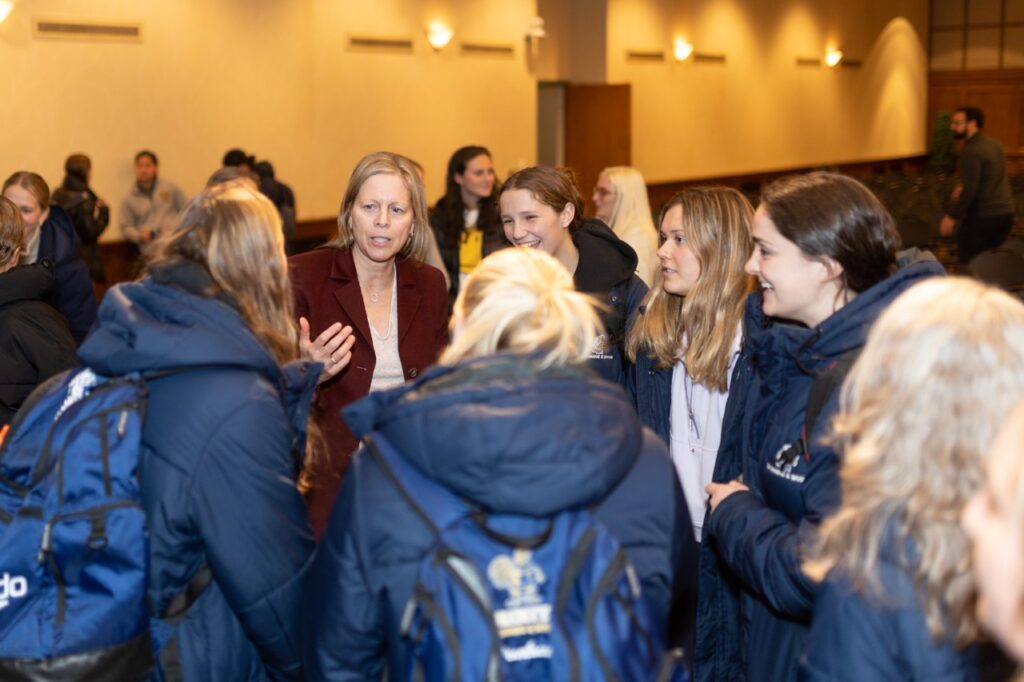 Women’s ice hockey co-captain Olive Scull ’23 asked about how to use sport as a vehicle for social change, with the “short answer [being] you absolutely can and must,” according to Ackerman.

“That’s why I like my job, because I believe in the power of sports to build bridges, create communities, and equalize,” Ackerman noted. “I think sports is a true meritocracy when you get on the field and has been one of the greatest contributors to advancement in our country for underrepresented groups.”

Student-athletes play a powerful role in that advancement by using their voices, because Ackerman believes that every athlete is a role model, especially via social media, which allows athletes to go straight to the consumer. She commented that the expansion of such programs as Diversity, Equity, and Inclusion committees helps educate, create safe environments, and allow for open dialogue on these important topics.

Viewing the progress with a glass-is-half-full mindset, Ackerman recognizes that girls’ and women’s sports are in a much better place than they were, but there are gaps in participation by women in athletics, along with opportunities and equity, that need to be addressed to continue this growth that blossomed in the summer of 1972. She addressed that a driving force in propelling the recognition and fandom of women’s sports professionally starts at the high school and collegiate levels, which contributes to laying the foundation for the elite level. Another aspect of progress is a heightened fandom or viewership for women’s sports on all levels; they need to be broadcasted more, attended better, and reported on in the same caliber as men’s sports, according to Ackerman.

“[Fan support] is a driver for any sport, men or women, if you are looking for some sort of growth here,” Ackerman said. “I always said to people when I was running the WNBA, ‘If you want to support the WNBA, buy a ticket—or buy a season ticket, better yet. If you are running a company, buy a sponsorship. Watch it on TV because if you are giving up your time to watch it, then that adds to the rating points that the networks use to pitch to the advertisers.’” 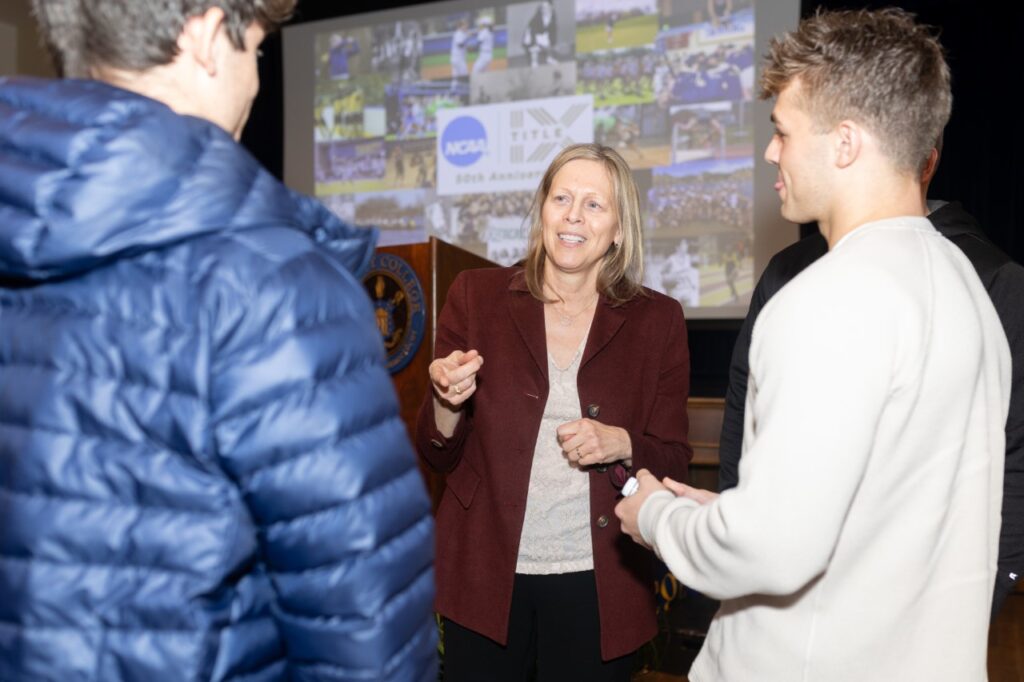 There have been ripple effects of Title IX that reach outside of just women playing in various sports, Ackerman said, especially getting females interested in becoming coaches, officials, broadcasters, reporters, administrators, and more. To continue the evolution of women in sports, Ackerman advised that no matter how difficult the journey is, to keep powering through the ups and downs and reach out to the people in this industry because, she said, “They care about the future of this business.”

Trinity has been celebrating Title IX at 50 all year. “It is a privilege to celebrate the 50th anniversary of Title IX by honoring the pioneers of women in sport both at Trinity and beyond,” said Trinity Associate Director of Athletics Kristen Noone. “Title IX was landmark legislation in 1972, and 50 years later, we have so much to celebrate in understanding the state of women’s sports back then. However, we are mindful that there is still significant work to be done. Through this celebratory year, it has become clear that change takes time, as evidenced by the enactment of Title IX and where we are 50 years later. We will continue in our unwavering commitment to provide an equitable experience to all of our student-athletes.”

The college’s first event in this celebration was “The Early Birds,” a conversation with some groundbreaking female Bantams who were critical to the evolution and expansion of women’s athletics at the college.

“Staying in the Game: From Player to Coach” highlighted former women Bantam athletes who have now taken on coaching roles at other universities and sports leagues.

“Title IX, Gender Equity, and the New Culture Wars” helped to shine a light on the impact of Title IX on women, both on and off the field. The talk featured Renny Fulco, associate professor of legal and policy studies and director of Trinity’s Public Policy and Law Program, and Pamela Whitley, Trinity’s assistant vice president for diversity, equity, and inclusion and compliance.

“The Power of Bantam Women” event over Homecoming Weekend focused specifically on supporting the future of women’s athletics at Trinity.

Trinity’s Office of Title IX supports the campus community in creating and maintaining a safe environment. Title IX of the Education Amendments of 1972 (Title IX) is a federal civil rights law that prohibits discrimination on the basis of sex in educational programs and activities that receive federal financial assistance. If only one of an educational institution’s programs or activities receives federal funding, all of the programs within the institution must comply with Title IX and its implementing regulations. Accordingly, Trinity College prohibits discrimination on the basis of sex in all of its programs and activities, including academics, employment, athletics, and other extracurricular activities. This prohibition includes gender-based harassment, sexual violence, and other sexual harassment. Compliance with Title IX is a community-wide responsibility. For more information or support regarding Title IX at Trinity, click here or email titleixcoordinator@trincoll.edu.