Trinity Celebrates the Enrollment of the Class of 2024

Amid the unprecedented context of a global pandemic, Trinity College has enrolled 610 exceptional students as Trinity’s Class of 2024. The students hail from near and far, and from all backgrounds. The class is notable equally for its academic strength and achievements and for its diversity of perspectives.

The college’s newest Bantams represent 35 U.S. states, as well as the District of Columbia, and with the presence of the new incoming class there are now 71 countries represented in the student body. Fourteen percent of the class would be the first in their families to graduate from college, and 21 percent identify as U.S. students of color. Among the Class of 2024, 51 percent identify as women, and 49 percent identify as men.

The academic strength of the student body continues to increase: 85 percent of incoming students are at the top of Trinity’s academic rating scale, compared to 80 percent last year. 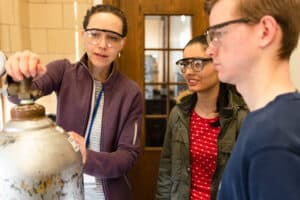 “I am so impressed with the quality and collective character of this class. It’s certainly one of the strongest in the college’s history,” said Angel B. Pérez, vice president of enrollment and student success.

This year’s class will include 16 Presidential Scholars (a five-year high), which is Trinity’s most prestigious academic distinction for incoming students, granted to a small number at the very top of the applicant pool. Along with many other scholarship recipients, 41 are 1823 Scholars—students who demonstrate strong academic achievement and exceptional personal character—and 16 are Davis United World College Scholars. The enrolled class also includes 9 Global Scholars, 15 Design Fellows, and 9 Posse Scholars.

“I had the honor of working with many of our incoming students as they made their decision about where to enroll during a global pandemic. I am in awe of their strength, perseverance, and optimism. Trinity is in for a treat when they arrive this fall,” said Pérez.

The context of the COVID-19 pandemic and its related challenges for students and families led Trinity to admit slightly more students than usual —35 percent of all applicants—and, in turn, contributed to a slightly lower yield rate (the percentage of accepted students who choose to enroll) than last year—29 percent, compared to 31 percent last year. Pérez and Dean of Admission Adrienne Oddi said the extraordinary efforts of their entire staff—who pivoted quickly to recruit and yield students virtually when met with travel restrictions and the campus’ shift to mostly remote work—combined with the unified efforts of the entire Trinity community contributed to the success in enrolling the Class of 2024. 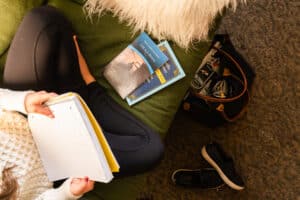 “We’re so grateful to have the support of the Trinity community as we recruit new students. Because of the strength of the Trinity community, we will be joined by strong and resilient young people who have experienced abrupt and rapid change upon change,” said Oddi. “They navigated abrupt shifts to remote works, Zoom graduations, and massive social unrest. They will join us ready to make a difference, on campus, in Hartford, and around the world.”

Among the strategic decisions and collaborative initiatives undertaken to address the impact of the pandemic on incoming families is a new program being offered for students from China, for whom travel restrictions and other challenges may make coming to Hartford difficult in the fall. Through an existing partnership, the college is working with Fudan University to create a special fall semester for the Chinese students in the Class of 2024. Eligible students will be notified via email. 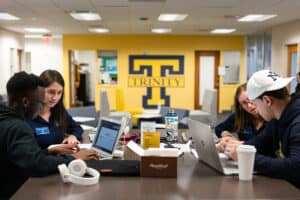 In Trinity’s fifth year as a test-optional institution (and in a year that saw many colleges switch to test-optional in light of pandemic-related challenges), 68 percent of the enrolled students chose not to submit standardized test scores—the highest rate in Trinity’s history. Research has shown that standardized test scores are not nearly as strong in predicting success in college as high school grades.

In addition to assessing students’ academic performance, the rigor of their courses of study, and their sustained extracurricular involvement, Trinity also evaluates students on a set of noncognitive traits—including grit, optimism, persistence, a willingness to take risks, and an ability to overcome adversity—that research has shown predict success in college. Students also are asked to submit with their applications an essay expressing their specific interest in studying and engaging with the liberal arts in an urban setting.