For the past five years, members of the Trinity College squash teams have been participating in Capitol Squash, an after-school program in which kids from the Hartford community come to Trinity to learn about the sport from mentors, including the Bantams. The mission of Capitol Squash is to empower the youth of Hartford to reach their potential as athletes, students, and engaged citizens.

At first glance, it is clear that the children are being impacted in positive ways, but this program also has helped the Trinity squash players in an equally powerful manner. Many of the college’s current squash players want to continue playing or coaching after their careers at Trinity, and the Capitol Squash program offers them valuable experience as coaches and mentors.

“Most Trinity students or players look for coaching jobs during the summer so it’s good to start teaching kids the ways of squash right now,” said Bantam women’s squash player Lakeesha Rarere ’20, who has been involved in the program since her first year in Hartford. “It is good for the Trinity community to be involved with Hartford as a city, and I get more confident in my mentoring abilities every week.”

Trinity men’s squash captains Tor Christoffersen ’19 (pictured, below right) and Charles Minnetian ’19 also have been helping with the program since their first semester on campus. Minnetian interned with the program during the fall of his sophomore year. “I have been doing this for a while now, and have been able to see the kids grow,” said Minnetian. “It started when most of the kids could not a hit a ball and now they are good. It is rewarding for me to give the kids another outlet.” 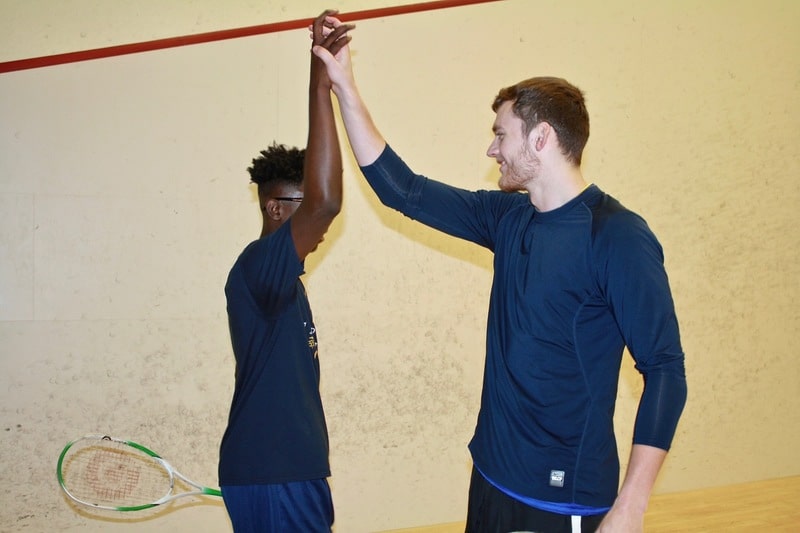 Christoffersen, from Sweden, is one of 23 current Bantam squash players born outside the United States, but his time with Capitol Squash has helped him feel right at home in Hartford. “We have players from so many different cultures, but everyone on the team still has a chance to give back,” added Christoffersen. “The kids get mentorship from us, as well as one-on-one training and help with academics. The program itself provides for them a sense of structure in their lives.”

The Capitol Squash program has formed a strong partnership with Trinity and is a great example of how impactful it can be for student-athletes to get involved in their local communities. “The Trinity players are able to show our kids not only what they can achieve as fantastic squash players, but as student-athletes and caring people,” said Capitol Squash coach Brendan McClintick.

“It has been fantastic to have the chance to give back to the community here,” said Professor of Physical Education Wendy Bartlett, head coach of women’s squash at Trinity. “These kids are our neighbors. They live right outside the campus. The personal relationship our student-athletes are developing with the kids are so valuable. They are so used to competing at a high level, but now they have to break down the game and teach it, and that helps them to develop another perspective on squash. It is easy for them to get so wrapped up in themselves, but this this program shows them how to give back.”