Back to The Primus Project

In early 2019, members of the American Studies Program, authorized by then-Dean of the Faculty Timothy Cresswell, initiated Trinity College’s membership in Universities Studying Slavery (USS). This national consortium fosters collaboration among dozens of colleges and universities publicly committed to “confronting our own past entanglement in human bondage” and to “addressing contemporary issues: race and higher education, inequality, and the complicated legacies of slavery on campuses, in communities, and in our world.” 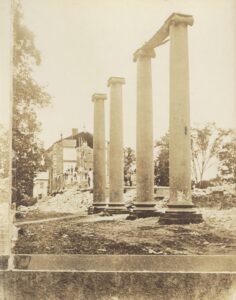 Some people may assume that the story of slavery at Trinity is a smaller and simpler matter than the better-known stories of Brown University or Georgetown University, where the trafficking and sale of human beings directly funded the universities, or the Universities of Virginia and North Carolina, where buildings were actually constructed by enslaved Black people. In fact, some of the most important recent scholarship in our field has focused on the subtler—less tangible but equally insidious—ways that American capitalism, and the institutions it sustained, relied on slavery and white supremacy.

In the slave society that was the antebellum United States, North as well as South, an economic and political infrastructure premised on white supremacy enabled unjust consolidations of power in white-controlled institutions and white people, mainly white men. To understand how that system benefited Trinity College is a complicated endeavor that requires scholarly expertise; an appreciation for the contingencies of historical evidence in general (the past has never been documented and archived equitably); and specialized understanding of the ways slavery’s tendrils permeated American society.

It also requires broad involvement. History is living. Facts endure, but their meaning changes, and they have different consequences, in different contexts. Fully reckoning with Trinity’s history with slavery means not just uncovering the evidence of our past but also crafting the narratives we use to frame our histories in ways that inform our present and give purpose to our future. The Primus Project engages Trinity students in the unfinished work of exploring the college’s past and interpreting it for our present community.

The first iteration of this work took place in a Spring 2019 course, “The History and Memory of Slavery at Trinity” (AMST 406), taught by then-Visiting Assistant Professor of American Studies Alexander Manevitz ’09. Students in that course conducted research, wrote papers, and developed a website to begin raising awareness and provoking discussion of the complex ways slavery is entangled in Trinity’s history and encoded in our campus. A new phase of research is underway, and a second iteration of AMST 406 taught in Spring 2021 by Associate Professor of History and American Studies Scott Gac.

In collaboration with the staff of the Watkinson Library and College Archives, the Primus Project plans to provide digital access to historical documents and other sources germane to the project’s research.