Throughout the summer of 2021, ten Trinity students have been conducting research in mathematics, some on campus and some from a distance. Hanyang Luo ’24 and Adam Minahan ’23, are two students whose research work has taken place on Trinity’s campus. Working with Ryan Pellico, lecturer in mathematics, their project is focused on modeling suspension bridges with non-linear ordinary differential equations. For Minahan, a double major in mathematics and mechanical engineering, from Keene, New Hampshire, the project has been especially relevant as it involves both of his academic interests. Luo, a computer science and economics major from Guangzhou, China, described their research as “an exciting opportunity to see the real-life applications” of his computer science coursework. 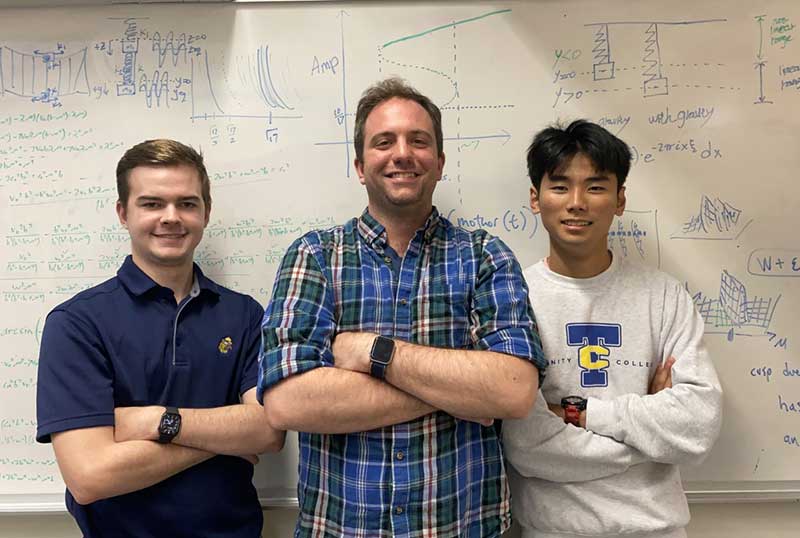 Beginning in late June, the research team has been working in Trinity’s computer lab, setting up mathematical models and running simulations, in what Pellico calls “numerical experiments.” Their findings, which they will submit for publication at the end of the summer, lend insight into the 1940 collapse of the Tacoma Narrows suspension bridge in the state of Washington. Minahan explained that previous models have mostly assumed periodic forcing, or the application of a back-and-forth force, but the research team has introduced a random forcing term, which represents unpredictable forces. By simulating unpredictable forces through a random number generator, the research team has explored a range of new possibilities and solutions to explain the Tacoma Narrows Bridge collapse.

The summer experience has encouraged both students to consider future research opportunities. Minahan hopes to build off of the project by constructing a physical model for his final capstone in engineering. “It would be fascinating to replicate our numerical results and transfer this research to another subject that I have a strong background in,” said Minahan.  Luo said that the experience has encouraged him to consider the possibility of working in research after Trinity, in computer science or other fields.

“Research is never as intimidating as students expect,” said Pellico, “It seems so mysterious, until you actually start. Whether or not the project is successful, students always come away with an important learning experience. This is why it is amazing that Trinity has so many different mechanisms for supporting student research.” 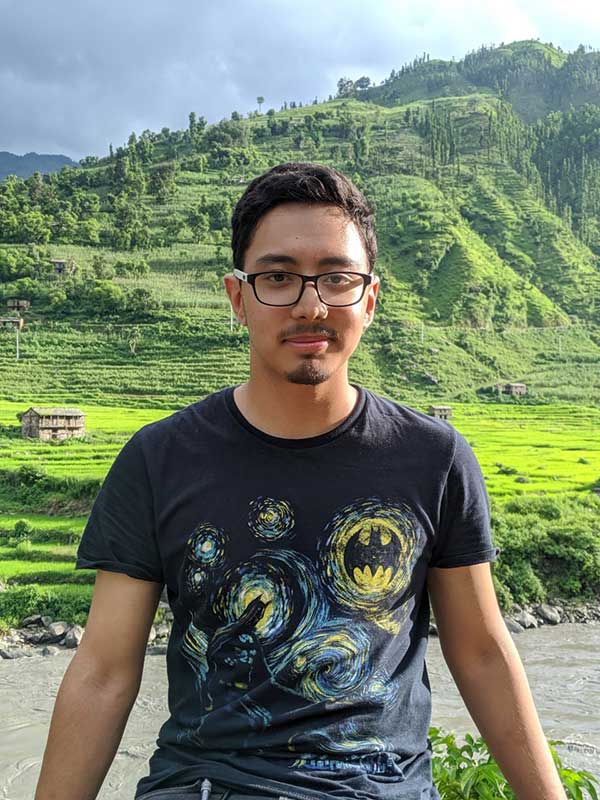 While Luo and Minahan are working with Pellico in the on-campus computer lab, Digesh Chitrakar ’22 is researching remotely with Per Sebastion Skardal, associate professor of mathematics. Chitrakar, a computer engineering and math major from Lalitpur, Nepal, has gained extensive research experience during his time at Trinity, having spent the previous two summers conducting research in engineering. For his final summer as an undergraduate, Chitrakar was curious to branch out and explore his interests in applied math with Skardal, with whom he has taken several classes. Skardal and Chitrakar are currently researching nonlinear random walks. “Imagine,” said Skardal, “a bunch of dots, or nodes, connected by paths. If a monkey is dropped on one node it will follow different paths to other nodes, creating a random walk.”

The concept of random walks has many real-world applications, even dictating how the internet works. By determining where random walkers go the most, search engines like Google create a ranking for websites, thus providing the most relevant and popular websites first. This summer, Skardal and Chitrakar are specifically interested in generating chaotic patterns of activity. In their modeling approach, they explained that they are trying to “change the rules” by tweaking the model to see where the random walkers go. They will submit their findings for publication at the end of the summer.

“Research is a process of trial and error,” Skardal explained. “Nine times out of ten, you get nothing. When you find that one thing, you just keep tweaking it, and I think that it is so important for students to understand that almost everything that you learn in the classroom has to be tweaked for the real world.”

Said Chitraker, “This experience has really pushed me outside of my comfort zone. By working through difficult problems and some unusual situations, I have become a much stronger researcher and critical thinker.”