Back to Leonard E. Greenberg Center for the Study of Religion in Public Life

The prize honors a journalist whose work demonstrates the qualities of integrity, insight, journalistic excellence, and serious moral purpose that were the hallmarks of Moses Berkman’s journalism, political editor, columnist and editorial writer on the Hartford Times from the 1920s to the 1950s. The prize was established by a gift from the estate of his wife Florence Berkman, also a longtime journalist at the Hartford Times and Hartford Courant. 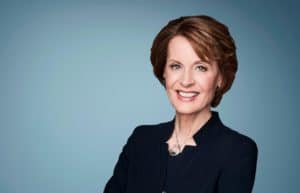 Over the course of three decades, Americans have relied on Joan Biskupic’s work to understand the role and work of a central institution in our lives, the United States Supreme Court. She has not only covered its decisions with clarity, accuracy and insight, but has helped Americans to grasp the views, personalities, and interactions of the justices who are the final interpreters of our laws. She is the seventh distinguished journalist to receive this honor, which is a memorial to the distinguished career of Moe Berkman, an alumnus and one of the most important political writers of his time.

Several things distinguish today’s honoree—her achievement over the course of many years in one of the most complex and demanding beats in American journalism, her professional insight as a journalist and lawyer, her high achievements, as we would say these days, on many different journalistic platforms, and her sustained success as a biographer, something very rare in contemporary journalism.

Born in Chicago, she was educated at Marquette University and at the University of Oklahoma and began her career with the kind of apprenticeship that seems unlikely to be reproduced in the future. She covered government and politics for the Tulsa Tribune and then at the Milwaukee Journal, before moving to the Journal’s Washington bureau. While still working full-time, she enrolled in Georgetown University’s Law Center, where she earned her law degree.

In 2000, she left the Washington Post, to the surprise of many journalists, for a position as legal affairs correspondent for USA Today. “Why would one top-notch journalist…leave the revered paper to work for a daily whose content was once compared to intellectual junk food?” The American Journalism Review asked. Joan Biskupic’s response was characteristic, “The possibility of illuminating the court for 2 million readers all across the country seems like a terrific challenge. I’ve always believed that the Supreme Court was something that I wanted to bring home to everyone, not just the lawyers in Washington or the people in powerful positions.”

It’s worth noting that for much of her career, she has worked alongside a distinguished group of peers covering the Supreme Court, a group that—strikingly–including many of the most accomplished women in American journalism. Despite wide recognition, Joan Biskupic resists taking herself too seriously. “We’re all a bit bookish, with bad eyes and a penchant for yellow highlighters,” she wrote of her peers in the Supreme Court press, in a blog. “We can laugh wildly at some joke filled with jargon that would fall flat outside the marble.”

After 12 years at USA Today, she moved to Reuters as editor-in-charge of legal affairs, a position which allowed her take a longer perspective and provide the context-rich perspective she has developed over many years. She now works at CNN, where she covers the Supreme Court full-time.

Beyond her skill as working reporter, one other dimension to Joan Biskupic’s work has earned our particular admiration—her unprecedented work as a biographer of Supreme Court justices. Many of the students here today have been assigned these books in Trinity classes because they provide the critical human sense of who our justices are and how they work together, or not. Her first biography, of Justice Sandra Day O’Connor, was published in 2005, followed by biographies of Antonin Scalia in 2009 and Sonia Sotomayor in 2014. Her biography of Chief Justice John Roberts is anxiously awaited. Please note that this roster includes justices with strikingly different ideologies and approaches to law. In an era of violent partisanship, Joan Biskupic is even-handed, thoughtful, informative, insightful and interesting. In a review of her book on Justice Scalia, another Supreme Court reporter colleagues saluted her as “an utterly fair-minded and diligent reporter.” Moe Berkman would be proud.