Bryant McBride ’88, P’20 has learned a lot from National Hockey League (NHL) player Willie O’Ree—the first black player in the NHL—and he’s passing on some of those lessons in Willie, the new feature-length documentary that he produced.

The film, which tells the true story of O’Ree overcoming racial barriers and providing a pathway for future athletes of color to thrive in their respective sports, was recently screened for Trinity College student-athletes on campus at Cinestudio and had its television premiere on ESPN2 on February 17, 2020. 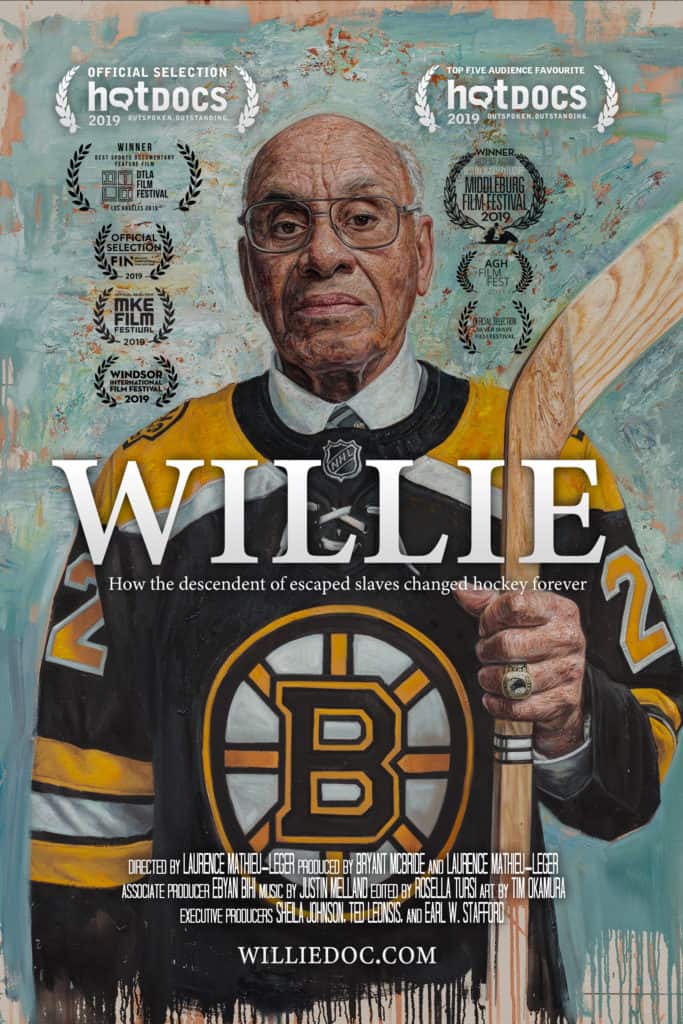 Entrepreneur and businessman McBride produced Willie with director and co-producer Laurence Mathieu-Leger in 2019, shooting and editing the film in nine months. It covers the professional ice hockey career of O’Ree from 1957 to 1979, as well as his lifetime of accomplishments and his induction into the NHL Hall of Fame in 2018. O’Ree’s dedication to overcoming barriers goes beyond his time as a professional player; since 1988, he has served as the diversity ambassador for the NHL. O’Ree’s life story has inspired numerous athletes and he is often thought of as “hockey’s Jackie Robinson.” McBride said, “We did our best to make more than a typical sports film—it’s a social impact film.”

McBride’s connection to O’Ree is a personal one. The two met when McBride was the vice president for business development for the NHL and he hired O’Ree as the league’s first diversity ambassador. McBride said that O’Ree had an “exceptional, always positive, always up, never bitter attitude.”

Much like O’Ree, McBride started playing hockey in Canada at a young age. He grew up in Sault Ste. Marie, Ontario, and has played hockey since he was 5 years old. During McBride’s time at Trinity, he was a defenseman on Trinity’s hockey team, was awarded All-NESCAC honors, and was on three NESCAC championship teams. He praised his coach, John Dunham, “who built the Trinity hockey program and was the best coach I ever had,” said McBride. To this day, McBride keeps in touch with his former Trinity teammates and said he is in contact with them “often every week, if not every month.”

Beyond athletics, McBride earned a B.A. in political science at Trinity. “It really provided an amazing foundation, not just in the subject area in terms of politics, leadership, and people, but it really helped me to become an entrepreneur,” said McBride, who described the major as being at the heart of a liberal arts education. “You learn how to work with other people and how to solve problems quickly,” he added.

After Trinity, McBride attended the John F. Kennedy School of Government at Harvard University for his master’s degree in public administration. McBride has created and sold six business ventures and is now CEO of the mobile video platform Burst. He currently coaches in a children’s hockey league in Massachusetts and said that he hopes to adapt the Willie documentary into a feature film.

By screening Willie at Cinestudio for Trinity winter student-athletes in January, Drew Galbraith—Trinity’s director of athletics and chair of physical education—wanted to provide a learning experience off the court and field. Galbraith said, “Willie really is a story about a lot of things that are going on in our world right now, including complicated conversations around race and equity. I thought this was a thought-provoking message that would resonate with many of our students.”

In the Q&A with McBride that followed the screening, Trinity students offered high praise for the documentary, O’Ree’s story, and McBride’s dedication to completing the film as a first-time producer.

Trinity women’s hockey team captain Sierra Lee ’21 said, “O’Ree’s experiences playing in Canada, and especially once he made it to the NHL, taught him leadership and how to be resilient, which I have also learned from my experience on the hockey team here at Trinity.” Lee added that the film appeals to a wider audience than athletes.

Adam Anderson ’20, captain of the Trinity men’s hockey team, said, “It was really cool seeing the Trinity connection to his story and how big of an impact Mr. McBride had on him being in the Hall of Fame.”

Joe Bell ’20, a member of Trinity’s men’s basketball team and a film studies major who aspires to pursue entrepreneurship and a career in the movie industry, was inspired by McBride. Bell’s conversation with McBride at the screening showed him some of the success that Trinity alumni have as entrepreneurs. “It made me feel like it’s more doable than I actually realized,” Bell said.

In the video clip below, from his keynote presentation at Trinity’s Bantams & Beyond event in spring 2019, Bryant McBride ’88, P’20 discusses his history with hockey, the NHL, and Willie O’Ree.