Behind the Soundtrack of Trinity

It would be difficult to find a member of the Trinity College community who has never heard the bells of the historic Trinity Chapel. Ellen Dickinson—musician, composer, and college carillonneur at Trinity—is the woman behind that music and has served the college for a decade.

In Dickinson’s words, the most rewarding aspect of her position has been “the instrument itself, which includes the space it lives in.”

Trinity’s carillon, a spectacular instrument consisting of 49 bronze bells played from a keyboard in the tower of the Chapel, has been at Trinity for almost a century. According to the Guild of Carillonneurs in North America (GCNA), it was in 1934 that Trinity College President Remsen B. Ogilby, the college carillonneur at the time, invited carillonneurs from the United States and Canada to attend a meeting at Trinity, a gathering that is recognized as the First Congress of the GCNA. 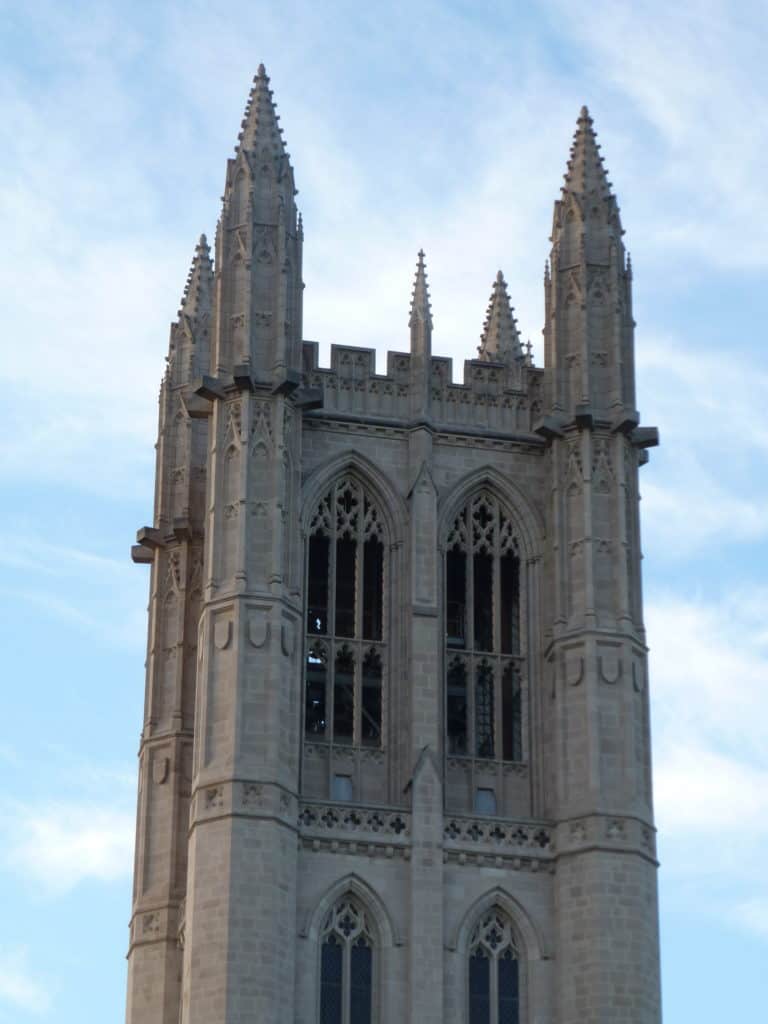 Today, Dickinson is a member of the GCNA, as well as the only person with a record 25 students to complete the process of becoming carillonneur members of that august institution.

Dickinson discovered her passion for the carillon during her undergraduate career, as she pursued a B.A. in music from Yale College. She later received her master of music in organ performance from the Yale School of Music and Institute of Sacred Music and, in addition to working at Trinity, today holds the position of director of bell programs at her alma mater.

In her role at Trinity, Dickinson is able to both perform and teach. Students, faculty, staff, and members of the Greater Hartford community can hear her play the carillon on select Thursdays of the academic year during “Thursdays with Ellen.” All are invited to bring lunch to the quadrangle, to the Chapel’s rose garden, or inside the Chapel as Dickinson performs, playing hymns, recognizable tunes such as “Imagine” by John Lennon, and even original pieces.

For a more intimate experience, students, faculty, and staff alike are welcome to enroll in “Music 107,” a class that can be taken for a half credit—or to satisfy an intellectual curiosity—to learn to play the carillon. 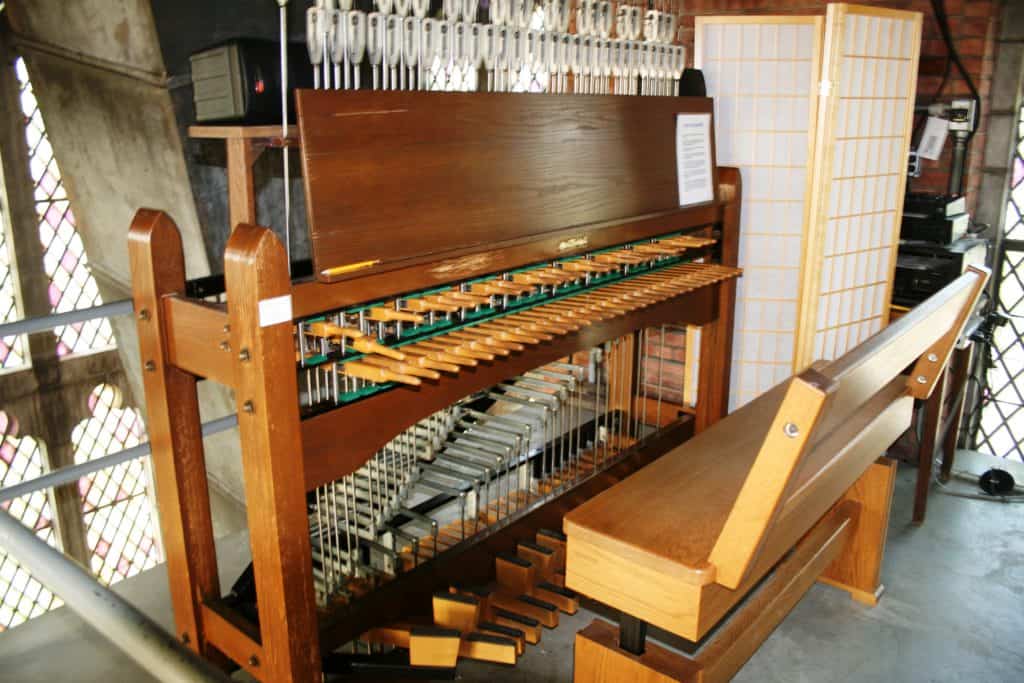 Certainly, the elegance that Houlihan described is not a skill easily realized, and, as such, Dickinson’s students first use a practice keyboard, unconnected to the bells. Dickinson acknowledged how intimidating learning to play the carillon can be, as beginners understand that their performances will not be limited to an intended audience but will be heard by passersby.

When attending an indoor concert production, Dickinson explained, concertgoers are anticipating the music; but the carillon is audible to everyone, whether people expect to hear it or not. “Yet in a sense,” Dickinson added, “the music then belongs to everyone. It can speak in different ways, at different times, to different people—it’s very exciting.”

Through Dickinson, the bells have become a unique, intangible symbol of Trinity, a sentiment echoed by Houlihan. “When you envision Trinity, you see the Long Walk, Chapel, and quad, and when you imagine what it might sound like, you hear the bells,” he said. “The carillon is Trinity’s soundtrack.” 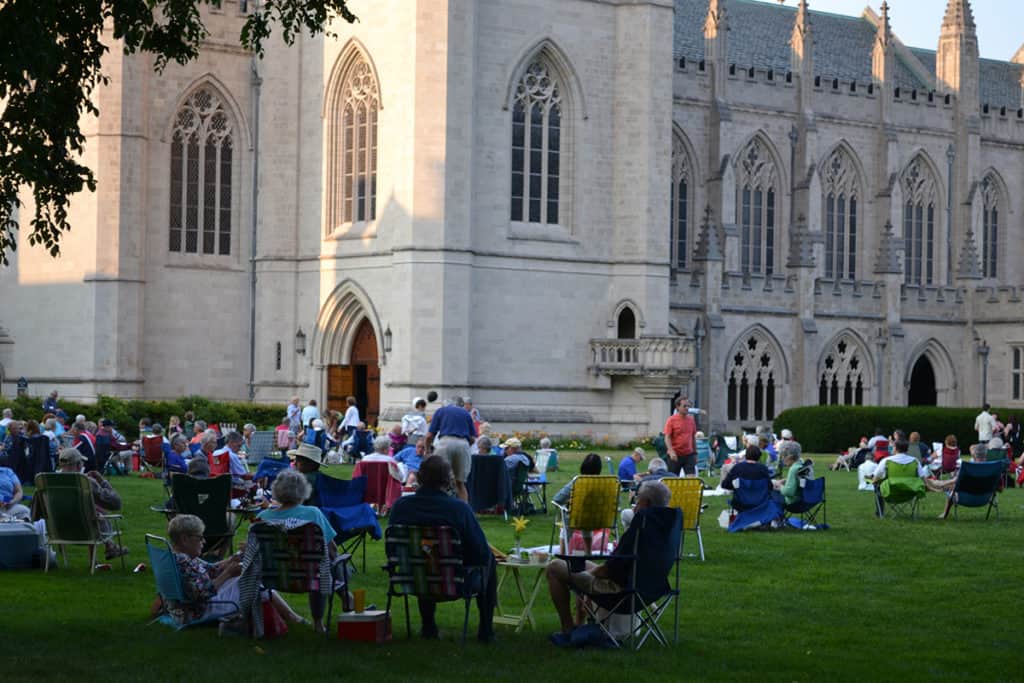 This soundtrack of Trinity extends beyond the academic year, as the Trinity College 2019 Summer Music Series commences on July 3. This includes the Plumb Memorial Carillon Recital Series and the Chamber Music Series—both of which are under Dickinson’s direction for the first time this year. Dickinson, the newly named director of Summer Music Series, will perform on Wednesday, August 7, at 7:00 p.m. All are welcome to attend this special performance on the quadrangle, to enjoy the sound of the carillon’s bells, and to revel in the talent of Ellen Dickinson, the woman behind them.

For a complete schedule of the 2019 Summer Music Series, click here.