Back to History & Traditions

We’ve established many beloved traditions during our nearly 200-year history.

These time-honored traditions connect each Trinity student to those students who have walked these halls, worn these colors, and studied in the shade of these same trees years, decades, and even centuries before.

The oldest continuously observed tradition at Trinity, matriculation is the symbolic act of enrolling at the college. Every incoming first-year student is asked to sign “The Charter and Standing Rules,” first penned in 1826. The signing ceremony, held in the soaring Trinity Chapel, is the culmination of the President’s Convocation, and the official opening of the academic year. 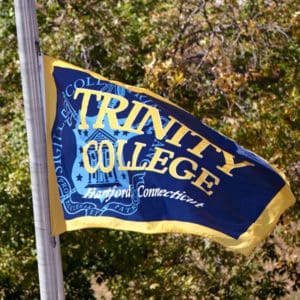 When the college moved to the current campus location in 1878, students called for new colors for the “new Trinity.” They voted for dark blue and gold—colors still worn today—for the simple, practical reason that they “go well together.” 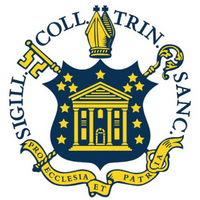 The Trinity seal dates back to the college’s name change from Washington College to Trinity College in 1845. Parts of the seal reflect the college’s Episcopal roots. The abbreviated Latin inscriptions read “The Seal of the College of the Most Holy Trinity” and “For Church and Country.” The shield is also crowned with a bishop’s ceremonial headdress. The Greek-revival façade represents the original Seabury Hall, and the stars represent the 13 colonies, giving a patriotic nod to George Washington, for whom the old college was named. 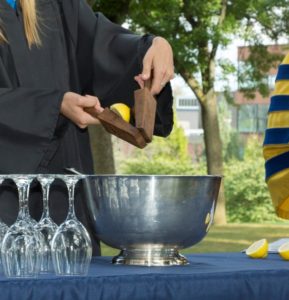 It didn’t take long for a spirited rivalry to build between classes, leading to brazen theft and cross-campus chases, with substitute squeezers stolen and replaced and re-stolen countless times. The latest version of the lemon squeezer makes its only appearance during Convocation, when the college president squeezes a fresh lemon to make a toast to the incoming class, followed by lemonade for all. 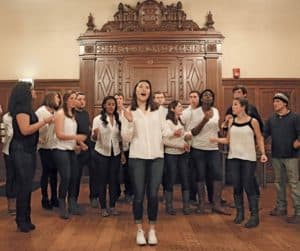 The popularity of Trinity’s a cappella vocal groups has its roots in the collegiate musical culture of the late 19th and early 20th centuries. Students and faculty would write original lyrics to popular songs and traditional hymns and perform them at campus ceremonies, athletic events, and casual get-togethers. Some songs were written about well-liked professors and administrators, while others were lyrical odes to the alma mater, like Trinity’s own “’Neath the Elms,” written by Trinity student Augustus P. Burgwin in 1882 and sung by the Trinity Pipes.

There is a large, rectangular stone set into the sidewalk in front of the Fuller Arch at Northam Towers in the middle of the Long Walk, inscribed with a verse from 1 Kings 20:11, “Let not him that girdeth on his harness boast himself as he that putteth it off.”

The quote was the centerpiece of a Commencement address delivered at Trinity in 1918 by former U.S. President Theodore Roosevelt, who came at the request of Trinity President Flavel S. Luther. Soon after the stone was added, Trinity students began the tradition of never walking on it before their Commencement day, fearing that to do so would prevent their graduating. Graduating seniors make a point of ceremonially stepping on the stone as they pass at Commencement. 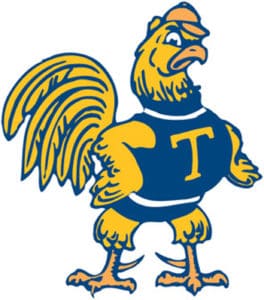 The origin of Trinity’s mascot can be traced to a spirited speech that the Honorable Joseph Buffington, Class of 1875, gave at an 1899 Princeton Alumni Association dinner. Comparing Harvard, Yale, and Princeton to the big shots of the “collegiate barnyard,” he described Trinity as a proud, unfazed rooster, “he is glad to be here, is not a whit abashed at your hugeness, [and] is satisfied with himself and his own particular coop.” The name caught on with Trinity students and alumni and the press soon started referring to Trinity athletic teams as the Bantams—and the name still stands today. 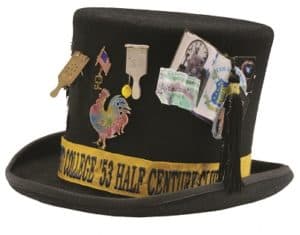 At their 50th Reunion, the Class of 1953 was greeted with a new tradition from the Class of 1952. The tradition continues today, whereby a representative from the previous year’s 50th reunion class passes the hat to the president of the class being inducted during the Half-Century event at Reunion. The president then wears the hat during the alumni parade on Saturday. Each year, the new 50th Reunion class adds a pin that represents their class and some part of their Trinity experience. 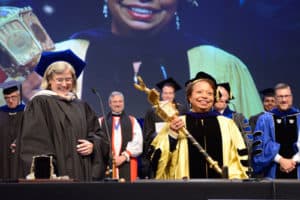 The Owen Morgan Mace stands for the president’s new executive power.  It was presented to Trinity in 1950 in memory of Owen Morgan, Class of 1906, who served his Alma Mater as a member of the Board of Fellows, as a Trustee, and as a treasurer of the college. Historically, maces were first used as weapons in warfare and later became a symbol of the sovereign and his power. One of the first known uses of a mace by an educational institution was at Cambridge University in the 13th century.  Today, a number of colleges use the mace as a symbol of authority and of the power vested in the president by the faculty and trustees. The mace precedes the president in academic processions.  The Morgan Mace is made of ebony, signifying endurance; bronze, meaning power; and gold, symbolizing dignity and glory. It is 44 inches long and weighs 20 pounds. On the head, or urn, of the mace are six seals representing the key institutions that form the college’s environment: the Great Seal of the United States; the Seal of the State of Connecticut; the Charter Oak; the original seal of the City of Hartford; the Washington Coat of Arms; and the seal of the Episcopal Diocese of Connecticut. Surmounting the Gothic urn is the Trinity College seal, crowned by an eagle about to take flight, symbolizing the freedom and power of an educated person.

The Book, which has been placed in the hands of every Trinity graduate at Commencement, signifies the delegation of responsibility to the president for maintaining the educational activities for which Trinity was founded. By chance, the Book became one of the college’s oldest traditions. As it is now related, at the college’s first commencement, President Thomas Church Brownell had intended to have each student touch the Bible as he received his degree. But when the moment arrived, President Brownell realized that he had brought only the bound volume of the order of exercises. He therefore had each student touch that book, which thereafter has been placed in the hands of every graduate since 1827.

The Key, which symbolizes the turning over of the physical properties of the college to the president, is made of bronze and is one of the keys that turned the original huge lock in the door of Williams Memorial, the current administration building.

The Presidential Collar, which is worn on ceremonial occasions, is the visible symbol of the president’s high office and authority.  The collar was presented to the college in 1953 by former president G. Keith Funston, Class of 1932, in memory of his grandmother, Maria Briggs Keith.  The chain symbolically links modern higher education with the universities of yesteryear.  The golden seal of the Trinity President hangs from the collar, which is fashioned of 20 replicas of the Trinity Elms and seven silver seals, including the six reproduced in the Mace, and the Trinity College seal superimposed on a triangle representing the religious foundations of the college, crowned by a sun that signifies enlightenment. In the lower corners of the triangles are the Book and a pair of student’s hands extended to receive it, symbolizing the desire of youth to receive an education.