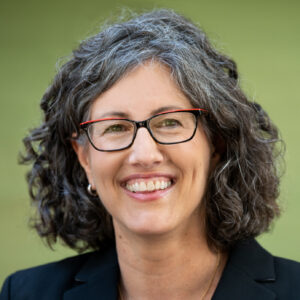 Rabbi Rachel thrives at growing Jewish community on campus by building meaningful relationships with students. She loves nothing more than the challenge of meeting a student where they are and facilitating their connection to whatever aspect of Judaism interests them – whether intellectual, cultural or spiritual. Rabbi Rachel is also deeply committed to pluralism, which necessarily involves facilitating connections between communities, speaking across difference, and interfaith work.

Rabbi Rachel was ordained by Hebrew College’s Rabbinical School in 2020. During and since rabbinical school, she has served several communities including Temple Emanu-el in Haverhill, Bowdoin College Hillel, Beth Israel Congregation in Bath, Maine, and Boston College Hillel. She has also participated in chaplaincy training at McLean Hospital and Brigham and Women’s Hospital. In addition, she has held several positions at the Hadassah-Brandeis Institute (HBI) at Brandeis University. As Academic Advisor at HBI, she oversaw a summer internship for undergraduate and graduate students who were conducting research on gender and Judaism.

In her prior career as a public interest attorney, Rabbi Rachel represented veterans, tenants, and domestic violence survivors in civil matters.